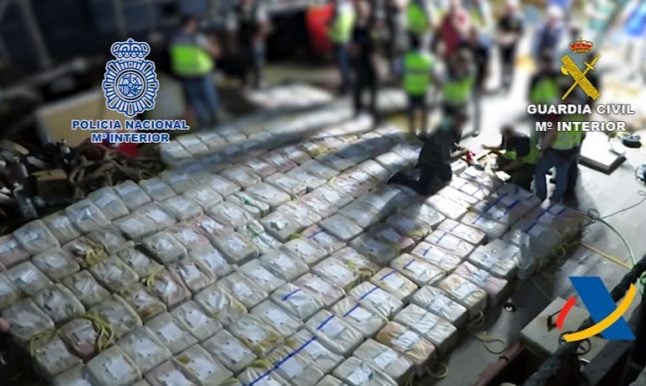 Spanish police seized 3,800 kilos of cocaine hidden in a boat intercepted in the Atlantic off the Canary Islands in October. Photo: Guardia Civil

Spanish authorities seized 32 tonnes of cocaine last year up from 15 tonnes in 2016, the interior ministry said in a statement.

Spain's close ties with its former colonies in Latin America, a major cocaine-producing region, and its physical proximity to Morocco, a major hashish producer, have made it a key entry point for drugs bound for Europe.

Spain seized “40 percent of the cocaine from South America that was intercepted in all of Europe and 70 percent of the hashish from Morocco” last year, the interior ministry said.

Drug traffickers have been forced to open new routes to bring in narcotics into Europe through Belgium and the Netherlands due to the success of Spanish police in seizing drugs, the ministry added.

Spain made its largest cocaine bust in 18 years in November when 5.8 tonnes of the drug were discovered on a container ship in the southern port of Algeciras, from Medellin in Colombia. The ship was supposedly carrying bananas.

The cocaine from that seizure had a street value of some €210 million ($250 million) and it had been divided into blocks of around one kilo for eventual distribution to a number of destinations.

A new technique used by drug traffickers involves throwing parcels of drugs with geolocation devices into the ocean from merchant ships and then recovering them with fishing boats or yachts.

A total of 69 tonnes of cocaine were seized in the entire European Union in 2015, up from 2014, according to the most recent figures from the European Monitoring Centre for Drugs and Drug Addiction.