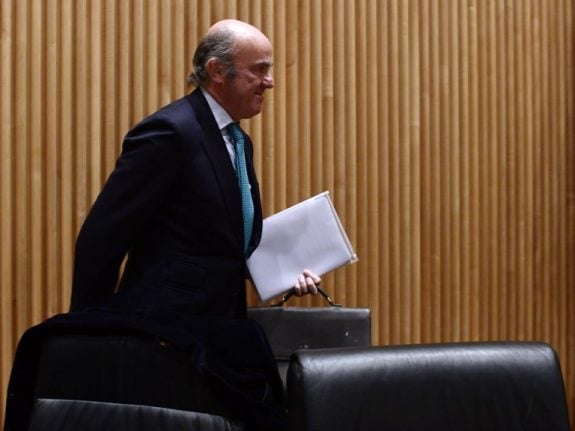 Spanish Minister of Economic Affairs and Competitiveness Luis de Guindos before a parliamentary commission at the Spanish parliament in Madrid on Tuesday. PHOTO: PIERRE-PHILIPPE MARCOU / AFP
The economic impact of the Catalonia region's effort to declare independence last month have been “limited” so far but the political standoff will weigh on growth, the agency said.
Fitch raised Spain's long-term debt rating one notch to “A-” with a stable outlook.
Spain was downgraded in 2012 by all major ratings agencies amid fears Madrid could require a bailout due to the weakness of its banks.
Fitch said on Friday that Spain was enjoying the fruits of an economic recovery, with the economy likely having expanded by an average of 3.3 percent between 2015 and 2017.
“Events around the Catalonia government's declaration of independence have underscored political risk but the economic impact has so far been limited,” the agency said.
Catalonia accounts for 20 percent of Spanish GDP and growth there is estimated to have slowed by two-tenths to 0.7 percent in the fourth quarter of 2017.
The central government deficit is likely to hit its 3.1 percent target this year, down from 4.5 percent in 2016. The unemployment rate in November was down two percentage points from a year earlier to 16.7 percent.
Since 2015, banking sector debt has fallen 25 percentage points to 159.9 percent of GDP.
“The Spanish banking sector's overall credit fundamentals have steadily improved over the last two years,” Fitch said, noting that the share of non-performing loans and foreclosed assets were still elevated but had fallen from 11 percent to 10 percent in the year ending in June.