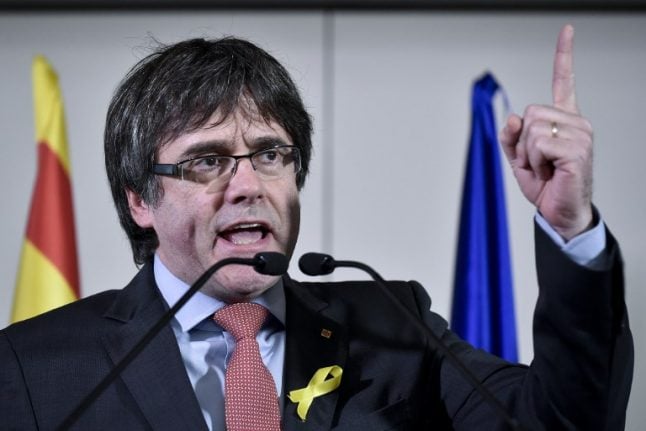 Cales Puigdemont said he could govern Catalonia "using new technology". PHOTO: JOHN THYS / AFP
“There are only two options: in prison I would not be able to address people, write, meet people,” Puigdemont, who risks arrest on charges of rebellion, sedition and misuse of public funds if he returns to Spain, told Catalunya Radio.
“The only way is to continue doing it freely and safely. Nowadays big business, academic and research projects are essentially managed using new technology,” he added.
His comments came as Catalonia's new parliamentary speaker, Roger Torrent from the pro-independence ERC party, held talks with party representatives to pick a candidate for the regional presidency.
Puigdemont, who was sacked along with his cabinet on October 27 after the regional parliament declared independence, is the only candidate from Catalonia's separatist grouping to lead the region. And given pro-independence parties won an absolute majority in elections on December 21, he in theory stands a good chance to be voted in at a parliamentary session due by the end of the month.
Plan to 'restore policies'
But there is a huge stumbling block in the way: he is in Belgium and won't come back to Spain.
The Catalan parliament's legal experts say the contender has to be physically present but Puigdemont insists he has the legitimate mandate of the people to rule after his Together for Catalonia list won the most votes within the separatist camp in the elections.
He wants to present his candidacy and government programme to parliament — a prerequisite to being voted in — remotely via videolink or by having someone else read it for him.
The central government in Madrid, though, has warned it will take the matter to court and keep direct control over Catalonia if Puigdemont tries to govern from Belgium.
Ultimately, it will be up to Torrent and his deputies — three of whom are pro-independence and three others against it — to decide whether to allow lawmakers to vote for a president even if he is not present.
In the interview, Puigdemont said he wanted to reinstate his sacked government as well as its policies, marked by disobedience towards Spanish courts and a failed strategy to break from Spain while he was president.
“We have a plan to restore democracy, the institutions and policies,” he said. “The result of these elections validate our government programme.”
Madrid's direct rule, imposed after the independence declaration, has caused resentment in a region that had enjoyed considerable autonomy before its leaders attempted to break away from Spain.
According to Economy Minister Luis de Guindos, the secession crisis that kicked off in earnest on October 1 when Catalan leaders held an independence referendum despite a court ban has taken a financial toll.
He has said the crisis has slowed economic growth in the region at an estimated cost of €1 billion ($1.2 billion). More than 3,000 companies have moved their legal headquarters out of the region as uncertainty persists.
By AFP's Daniel Bosque