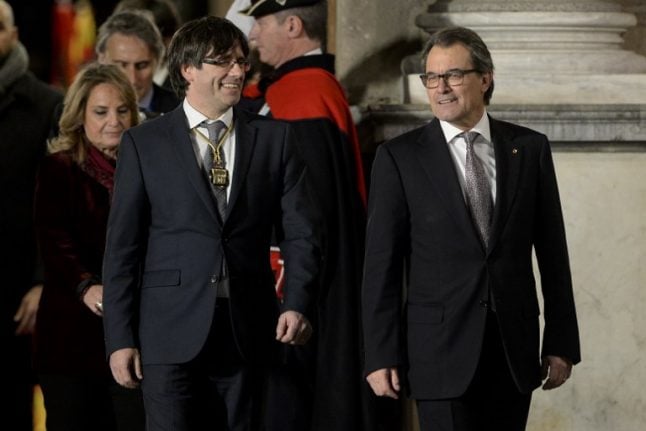 Artur Mas (R) and Carles Puigdemont both came from the conservative CDC party, which in 2016 changed its name to the Catalan European Democratic Party (PDeCAT). Photo: AFP

The conservative CDC party, which in 2016 changed its name to the Catalan European Democratic Party (PDeCAT), received at least €6.6 million ($8.1 million) from Spanish infrastructure group Ferrovial “in exchange for guaranteeing the allocation of a certain amount of public works,” the court found.

Ferrovial would pay the commissions as donations to the Palau de la Musica, a famous cultural institution in Barcelona, whose two directors would take a cut and send the rest on to CDC, it added.

The party as a whole was not on the bench of the accused during the trial, but it was still found to have benefitted from illegally obtained money and ordered to reimburse the €6.6 million.

The scandal, which erupted in 2009, piled pressure on CDC, a stalwart of Catalan nationalism which in 2012 started pushing for outright independence — a process that culminated in a failed attempt to break from Spain in October.

To escape the spectre of corruption, CDC changed its name in 2016 to PDeCAT, which last week found itself without a president after Mas — Catalan leader from 2010 to 2016 — stepped down in what critics say was linked to Monday's sentence.

According to the court, Ferrovial and CDC agreed that the company would pay a commission of four percent on the value of the public works.

The party's former treasurer Daniel Osacar was sentenced to four years and five months in jail.

The sentence comes just two days before the Catalan parliament's first session since elections on December 21st in which separatist parties retained their absolute majority.

But they are having a tough time forming a government as their favoured candidate, Puigdemont, is in self-imposed exile in Belgium.

He will likely be arrested on charges of rebellion, sedition and misuse of public funds for his role in the independence drive if he comes back to Spain.