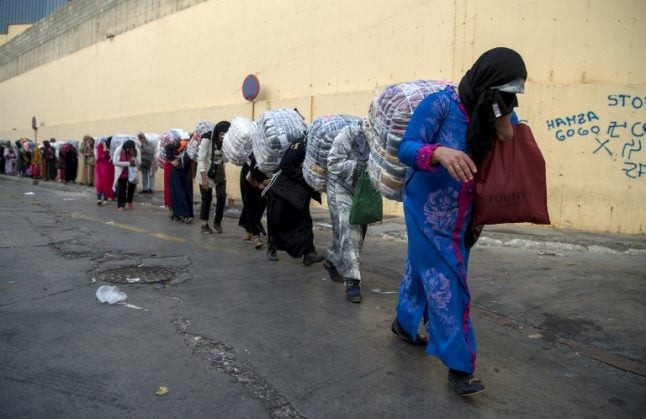 The stampede took place at the Tarajal II crossing for pedestrians between the Moroccan border town of Fnideq and Ceuta, rights activist Mohamed Benaissa said.

Two women in their 40s named Ilham and Souad, both from Fnideq, were killed, the head of Morocco's Northern Observatory for Human Rights said.

Known as “mule women” on the Spanish side of the border and “hamalat” or porters in Morocco, these impoverished women eke out a living lugging back-breaking goods between the two countries. Ilham and Souad were about to cross the border with merchandise when the stampede occurred.

Local officials said in a statement that authorities were investigating the deaths.

Last year, at least four female porters were trampled to death in crushes at the same border crossing.

The porters often carry loads much heavier that their own weight strapped to their backs.

It is estimated that around 15,000 female porters tread the route between Ceuta and Morocco, even if the daily number is lower after the Spanish authorities established a limit of 4,000 people per day.

Rights groups have repeatedly denounced the work as “humiliating”, saying it is tantamount to trafficking tolerated by the authorities.

Watchdogs say the women are being exploited by powerful interests.