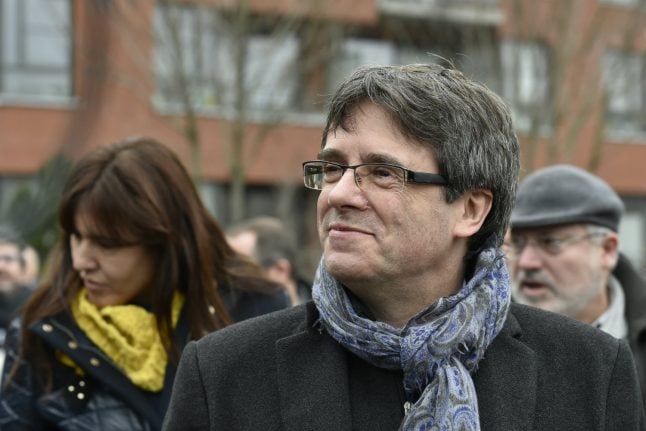 But he is in self-imposed exile in Belgium and risks arrest on charges of rebellion, sedition and misuse of public funds for his role in the region's failed independence bid if he comes back to Spain.

To be elected president, he should in theory be present at the parliamentary session where the vote takes place, but his supporters want him to appear by videolink or write a speech and have it read by someone else.

Asked about which option his party preferred, Elsa Artadi, Puigdemont's campaign manager, said they were “looking into all the tools that Catalan parliamentary rules allow.”

In Brussels for a working meeting, she added that Puigdemont would not come back to Spain.

It does not detail whether this must be done in person, but several legal experts, the opposition and the central government insist it cannot be done remotely.

On Friday, central government spokesman Íñigo Méndez de Vigo said Madrid would oppose such a move, adding that the candidate to Catalonia's presidency should be physically present.

“The government would take any such trick to court, without any hesitation,” he added.

Catalonia's Socialist party has asked judicial experts at the regional parliament whether appearing by videolink or via a written speech would be legal.

According to the Catalan daily La Vanguardia, “there is total unanimity” among these experts that his physical presence is required.

Artadi said it would be up to the next parliamentary speaker or lawmakers as a whole to interpret the rules.

It is still unclear however whether some separatist lawmakers will be able to vote, given some are in Belgium with Puigdemont and others in jail pending a probe into their role in the independence drive.

On Friday, the Supreme Court refused to allow the three jailed lawmakers — including former Catalan vice president Oriol Junqueras — out to attend the first parliamentary session on January 17th.

But he has allowed them to pass their vote on to someone else.