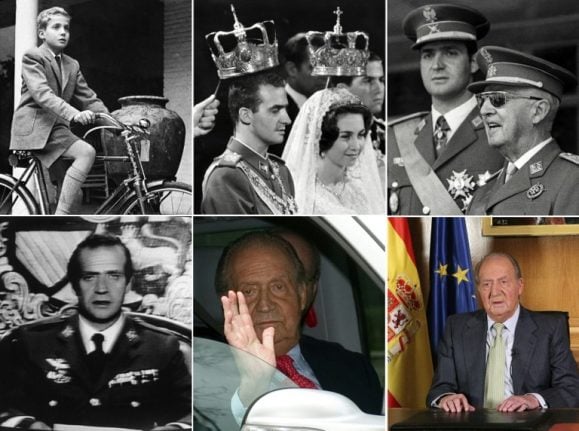 To mark this momentous birthday, here's a look at five key moments in the life of King Juan Carlos.

Born in Rome on January 5, 1938, “Juanito” spent his childhood in Italy and Switzerland. His grandfather King Alfonso XIII had fled Madrid seven years earlier and the family was kept in exile by Spanish dictator Francisco Franco, whose side won Spain's 1936-39 Civil War. At the age of eight he was sent to a Swiss boarding school and two years later his father, Juan de Borbon, agreed to send him alone to Spain where Franco wanted to take charge of his upbringing.

Perhaps the darkest episode in Juan Carlos's life happened at 18 when he accidentally shot dead his younger brother Alfonso at the family's home in Portugal. Photo taken on June 4, 1962 at the Vatican shows Prince Juan Carlos of Spain and his wife Princess Sofia of Greece after a private audience with Pope Saint John XXIII. Photo: AFP Archive

Married since 1962 to Princess Sofia of Greece, Juan Carlos was named by Franco in 1969 as his successor. But the dictator, who behaved like a king, maintained tight watch over Juan Carlos and controlled key aspects of his life. Juan Carlos was proclaimed King of Spain on November 22, 1975, two days after the death of Franco put an end to 36 years of dictatorship. King Juan Carlos of Spain and Queen Sofia wave to the crowds on November 27, 1975 during the religious ceremony of his enthronement at the Jeronimo church in Madrid. Photo: AFP Archive

The following year he picked a former minister from Franco's administration, centrist Adolfo Suarez, to head the government and guide Spain's transition to democracy, upsetting Franco supporters who had hoped he would continue in the dictator's footsteps.

Suarez swiftly legalised the Communist Party of Spain that was so hated by Franco and issued an amnesty for political crimes.

After Spain in 1977 held its first democratic elections in four decades, Juan Carlos was hailed as the king of a new democratic country.

Army leader Lieutenant Colonel Tejero burst into the Spanish parliament on February 23, 1981, brandishing a pistol as his followers fired over the heads of terrified lawmakers in an attempted coup carried out “in the name of the king”.

King Juan Carlos was instrumental in ending the rebellion by announcing on national TV that such action would not be tolerated. The king, then aged 43, remained in contact throughout the night with army officers to ensure the coup ended. Realising they had little support, the rebels finally surrendered and let go their captives.

In April 2012, the monarch at 74 fell and broke his hip during a private hunting trip to Botswana he took with a divorced German aristocrat, with whom he was reportedly having an affair.

The luxury trip — paid for by a close friend of the future king of Saudi Arabia — sparked outrage in recession-hit Spain and the king issued an unprecedented apology.

“I am very sorry. I made a mistake and it won't happen again. Thank you for your interest,” he said during his televised departure from a Madrid hospital.

The Spanish royal family had long been sheltered from news media and public criticism, but after the incident the press began to question the king's alleged romantic ties, the source of his fortune and his close ties to Gulf monarchies. .In June 2014 the 76-year-old king tearfully signed the bill on his abdication in favour of his son Felipe, aged 46.

Juan Carlos maintains the honorific title of king and in 2014 parliament awarded him legal immunity.