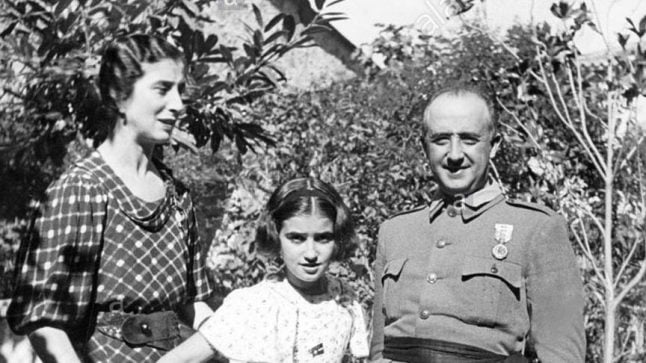 Franco used and moulded his daughter into the face of fascist Catholic youth in Spain. Archive/Semana
Born in the northern Spanish city of Oviedo in 1926, María del Carmen Franco Polo lived a life of privilege even before her father took control of Spain in 1939.
Her mother, also named Carmen, was the daughter of a wealthy businessman from that same city in Asturias.
She met Francisco Franco, then an up-and-coming army lieutenant colonel, in 1923.
The couple left not long after for Spanish Morocco, from where Franco built his military influence and power and later led a successful uprising against Spain’s Republican Government.
According to Spanish daily El Español, she had a lonely and secluded upbringing as the only child of Spain’s Generalísimo.
Franco used and molder her into the face of fascist catholic youth in Spain, spurring the Third Reich to also profile her in their propaganda bulletins.
Footage of Carmen Franco's wedding in 1950
She married a neurosurgeon with aristocratic ties in 1950. Together they acted as Franco’s foreign ambassadors and bore him seven grandchildren.
Despite her father’s death in 1975 and Spain’s transition into democracy, her family was able to hold onto most of the assets and property that the Caudillo had acquired while in power.

Video of a young Carmen promoting her father's message, while the dictator mouths her words in the background

She was also given the title “Duchess of Franco with Spain’s Greatness” by the newly reinstated monarch at the time, King Juan Carlos, a title which officially maintained her place in Spanish aristocracy.
Carmen Franco and her husband arriving in Belgium in 1960. Photo: BELGA/AFP
Carmen Franco also chaired the National Francisco Franco Foundation (FNFF), dedicated to promoting the fascist dictator’s legacy, until her death.
She previously said that her father was a “chauvinist” but was also “moderate and intelligent” and that he “had a good sense of humour before the Civil War”.
READ ALSO: Franco's summer palace to offer guided tours that 'glorify' dictator
Her death in Madrid on Thursday is likely to symbolize a turning point for many in Spain who feel the wounds of the civil war and ensuing dictatorship remain open to this day.
Francisco Franco is said to have been responsible for the deaths of 300,000 people during his fight for and time in power.