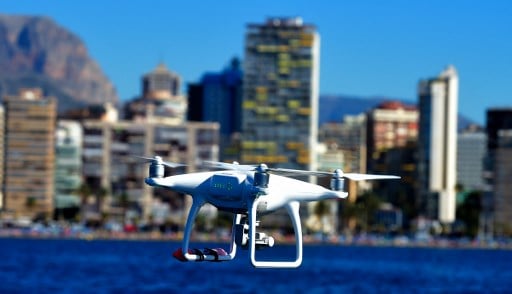 Drones are already being used by police in Benidorm to patrol the beaches. JOSE JORDAN / AFP

In recent times, Spain’s tax agency has lost up to a €1 billion a year to cigarette smuggling.

It has long been an issue in La Linea de la Concepción, a town on the border with Gibraltar where smugglers regularly take advantage of the British overseas territory’s lower cigarette prices.

In tiny Andorra, as well as in the bordering Catalan town of Seo de Urgel, the main problem is the illicit transfer of huge amounts of undeclared cash into the principality.

In a bid to tackle their huge losses, the Agencia Tributaria is coughing up €474,000 in two security camera systems.

The first of these will be a fleet of drones, each one equipped with movement, vehicle and face recognition programmes.

Once targets have been sighted and pinpointed by customs officers, the drones have the ability to follow suspects to facilitate a pursuit.

Each drone will have a 30-minute flight time and will be able to operate at a range of one kilometre from the operator.

Spanish authorities will however have to pilot the drones with care as they have been banned from Gibraltarian air space due to previous incidents involving The Rock’s airfield.

For ground patrolling, Spanish border authorities near Andorra will have access to vehicles equipped with “an arsenal of cameras” -digital and analogical, recording 360-degree video, with periscope features and all from camouflaged devices that capture every discreet action from potential tax evaders.

Even the vehicles’ windows will have the functionality to adapt visibility to day and night as well as varying weather conditions, all with the object of no longer succumbing to further criminal activities.