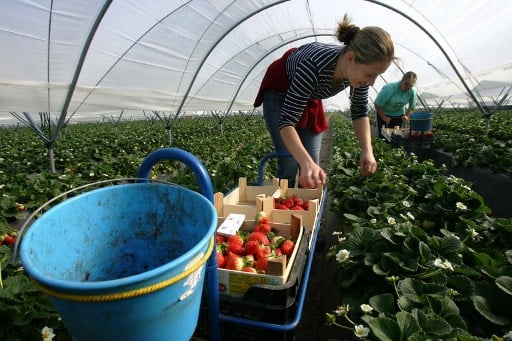 In 2015, Andalusia had the highest unemployment rate in the EU. SAMUEL ARANDA / AFP
The mass job offer, launched by Andalusia’s Employment Service (SAE), was made available to the public for a month to little avail.
“We had the same problem last year when there wasn’t the workforce needed to collect all the fruit,” Manuel Ceada, chief delegate of Huelva’s Economic Council, told finance daily Libre Mercado.
“Some people might think it’s a contradiction that with the number of people out of work in the region, these job vacancies don’t get filled,” he added.
“The truth is that people who opt for agricultural jobs are the ones who haven’t been able to find any other kind of work.
As soon as they get another job offer that meets their skillset, they quit.
According to local agrarian association UPA, there’s a total deficit of 32,982 strawberry pickers in the province of Huelva.
As a result, they’re taking measures to bring in workers from Morocco and Romania to fill the positions.
Spain has seen considerable improvements to its crippling unemployment rate since peaking at 26.3 percent in 2013.
In 2016 the jobless rate had dropped to 19.6 percent and in August 2017 it stood at 17.1 percent.
But Andalusia, where there are still 851,742 people out of work and 96,89 percent of new contracts are for temporary work, it seems bizarre that the chance of earning some easy money would be so radically ignored.
Even a January 2017 survey by recruitment agency Adecco contradicts this news, with only 2 in 10 of jobless people surveyed saying they would turn down a job offer.
Perhaps potential candidates feel they are overqualified for fruit picking, or they see farm work as below them, but it should not be forgotten that only two years ago the region had the highest unemployment in the whole of the EU with a staggering 34.8 percent.
Url copied to clipboard!