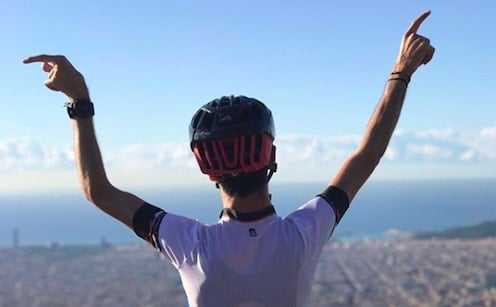 Here is one of those stories that really call into question the meaning of “disability”.

Barcelona native Alex Roca lives with cerebral palsy, a neurological disorder characterized by the loss or impairment of motor function, as a result of brain damage.

Alex developed cerebral palsy when he was just six months old, leaving the left side of his body almost entirely paralyzed and preventing him from being able to speak.

Life has planted many obstacles in his way, but through sport Alex has proven to himself and others just how much he can actually do.

In April 2018, he will take part in an arduous six-day mountain bike race across the Sahara desert in Morocco, called the Titan Desert.

Some would say he’s taking on too much but the Barcelona native has already taken part in triathlon’s and other long-distance races.

“I used to watch my brother take part (in triathlons) and I always wanted to do one,” he told Catalan daily La Vanguardia about his immersion into endurance sports in 2014.

Three years on and Alex has three triathlons under his belt and the backing of big sponsors. No mean feat.

“That feeling of crossing the finish line after swimming, cycling and running, it’s indescribable,” he says.

“I wouldn’t change it for the world. Well, maybe for the feeling I got when Barça beat PSG 6-1!”

Before he’d had the chance to prove himself, Alex and his entourage started a crowdfunding campaign based on T-shirts with the slogan “El límit te’l poses tu”, which means “you set your own limits” in Catalan.

Alex ended up donating the money to a hospital after global betting house Bwin came on board as his sponsor.

With nothing left to prove to the naysayers, Alex has just his dreams and goals to contend with. A true fighter.