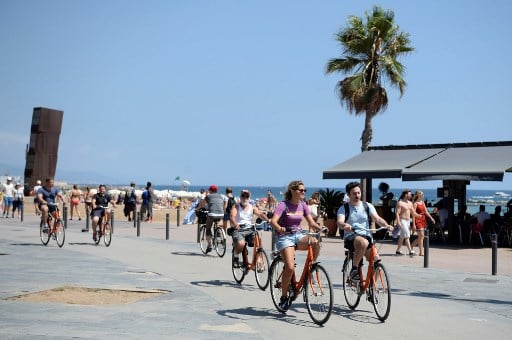 Tourist numbers have risen yet again, despite political instability in CataloniaJosep LAGO / AFP
Tourism really is the industry that keeps on giving in Spain.
According to a study by Frontur, the tourism branch of the country’s National Institute of Statistics, figures from January to November 2017 stand at 77.8 million foreign visitors and that number is likely to rise above 80 million by the time the year is over.
That estimate represents a growth of 5 million tourists since 2016.
Bearing in mind that Catalonia’s tourism activity slumped by around 15 percent as a result of the region’s political instability in October and by 2.3 percent in November, the figures are extremely encouraging.
Especially when considering that Catalonia received a quarter of all foreign visitors to Spain in 2016.
“The tourism sector is one of the most strongly affected by the instability,” Prime Minister Mariano Rajoy told Parliament at the time of the peak in the Catalan crisis.
Fortunately, that warning doesn’t seem to have become a reality anywhere in Spain.
In fact, Catalonia remains the most visited region ahead of the Balearic Islands and the Canary Islands, despite its recent “crisis” slump. The rest of Spain saw a 7.4 percent rise in foreign tourism numbers in November 2017.
So far this year, 18 million Brits have chosen Spain as their holiday destination, a 7 percent increase compared to the same 11-month period in 2016.
In second place came German tourists – 11.4 million, up 6.1 percent – followed by French visitors, 10.7 million of whom have headed for Spain so far this year.