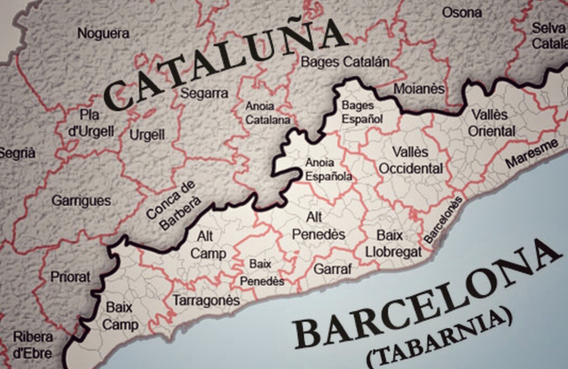 The Change.org petition, which has gathered over 21,000 signatures in just three days, was a trending topic on Twitter with over 150,000 users of the social media platform discussing it, including Catalan politicians.
Its backers mirror the language of Catalan separatists to argue that Tabarnia — a word formed from Barcelona and Tarragona, the names of Catalonia's two main cities on the Mediterranean coast — “is a region that differs in many aspects from the rest of the region it belongs to.”
Pro-independence parties won a slim majority of 70 seats in the 135-seat Catalan parliament in a regional election on December 21, even though they did not get over half the ballots cast due to a quirk in Catalonia's electoral system which awards more seats to rural areas where support for independence is higher.
“Our vote is worth three or four times less than those in Girona and Lleida,” the petition argues in a reference to the two Catalan provinces whose support for independence helped give separatist parties their majority.
The fictitious petition was launched by a movement which calls itself “Barcelona is not Catalonia”, a play on the separatist slogan of “Catalonia is not Spain”.

They argue that Barcelona and Tarragona suffer a “fiscal deficit” with the rest of the region, echoing the argument of separatists who say Catalonia, one of Spain's richest regions, pays more in taxes to the central government than it gets back in investments.

Please #europe help #Tabarnia ,we are a country with history, with a great culture and two languages ,our past the County of #Barcelona ,Tabarnia is not #Catalunya pic.twitter.com/t4lG6OJLA5

It also claims the “right to decide if we want to set up a new Spanish region that isolates us from the separatist threat” and argues that the Madrid area, which was once part of the region of Castile, is “now one of Spain's motors”.

The #Tabarnia rising is the best antidote to the narrow-minded, inward-looking, humourless, utterly depressing Scottish, English, Catalan and Spanish nationalism that has characterised the last few years in the places I care most about in the world. Thanks to whoever’s behind it!

“If nationalists can invoke the non-existant right to divide, anyone can do it,” the leader of anti-independence party Ciudadanos, Albert Rivera, said in a Twitter message that included an article about Tabarnia.