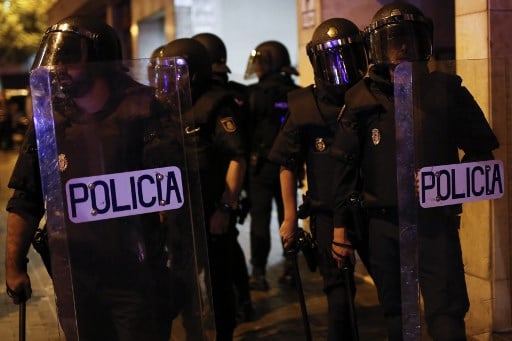 Officers from Spain's National Police and Guardia Civil forces sent to the northeastern region at the end of September “will be gradually withdrawn until Saturday”, a spokesman for the interior ministry said, adding the withdrawal had started Tuesday.

The spokesman did not say how many officers were deployed, but top-selling daily newspaper El Pais put the figure at around 10,000.

Shocking scenes of riot police using batons and rubber bullets to remove people from polling stations on the day of the referendum that was banned by the courts made headlines around the world and fuelled tensions in Catalonia.

At leasts 92 people were injured on the day of the referendum, according to hospitals.

Catalonia has its own police force, the Mossos d'Esquadra, and the other forces usually have a more marginal role in the region. Catalan separatists have dubbed the police reinforcements from other parts of Spain as an “occupying force”.

The region has been under direct rule from Madrid since October 27 when the regional parliament declared independence.

Spain's interior ministry chartered three ferries in September to house police sent to back up forces in Catalonia ahead of the outlawed October 1 referendum.

One of these ships caught the attention of the general public and the press given that it was bizarrely decorated with giant Looney Toons characters Wile E Coyote, Tweety-Pie and Daffy Duck.

Spain moves to cover up Warner Brothers figures on side of riot police ship sent to Barcelona to stop #Catalan vote https://t.co/owe9g78C4w pic.twitter.com/JU6U1hHEp7

Spain's central government also dismissed the Catalan government, dissolved its parliament and called an early election in the region on December 21.

Separatist parties once again won an absolute majority in parliament in that election and are expected to try to form a new government.