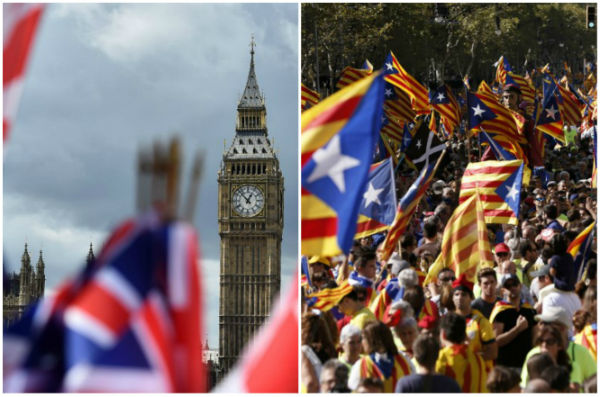 The crisis in Spain served as a stark reminder of the fault lines that run through Europe, with a country's central government battling a region whose leaders want to break away.

In Britain, the cry for sovereignty brought 17.4 million people to the polls to vote for Brexit in June 2016.

Campaigners also played on anger about having to fund the EU — arguing that it imposed bureaucratic rules from afar and prevented the country from engaging with the rest of the world.

In Catalonia, emotional arguments dating back to the Franco dictatorship combined with economic issues to fuel calls for independence.

“The nationalists understood that in developed and prosperous regions, you can no longer simply appeal to the idea of historic oppression,” said Bruno Yammine, a Belgium-based historian.

The “Brexiteers” argued that money currently being paid by London to the EU would be better spent on the public health service, despite their financial figures being hotly disputed.

In Barcelona, “there was the idea of a Catalonia that could be an international platform within the framework of the EU, a North American style of platform that could bring additional growth,” said Andres de Blas Guerrero, a political scientist at Spain's National University of Distance Education.

Other sentiments seized on by populist nationalists include the threat of immigration to national identity and a rejection of elites.

For Renaud Thillaye, European Affairs analyst at Flint Global in London, a management consultancy, the success of nationalism is linked “on the one hand to corruption and the discrediting of traditional parties, and the thirst for more local democracy.

“On the other hand, there is a need for cultural anchoring around a common language and heritage at a time when everything is moving very fast and the artificial character of nation states is all the more apparent.”

Against this backdrop, nationalists have been able to paint supra-national bodies such as the EU as instruments of globalisation, which they blame for reinforcing the domestic wealth gap and testing national solidarity.

Thillaye said the EU wants to avoid the proliferation of states at all costs and is doing everything possible to discourage independence movements, whether it be in Scotland, Catalonia or Corsica, who may at one point have seen the EU as an ally in their fight against the central state.

The EU sided with Spain in the Catalan crisis and refused Scotland's demand for a separate status after Brexit.

Bruno Yammine said this demonstrated that the danger posed by Catalan nationalism, and by extension all nationalist movements within the member states, is more than theoretical.

“No state wants a proliferation of separatism, since almost every European country has minorities of its own, some of whose leading figures have nationalist aspirations.”

Europe has so far resisted the shock of Brexit.

The eurozone has been spared any financial instability linked to the move since Britain is not a member.

The tortuous nature of the Brexit negotiations may deter other member states considering leaving.

But nationalist tensions are “not about to disappear,” warned Thillaye.

“The countries that will not be able to find an outlet for these demands risk being plunged into serious trouble, as we see in Catalonia.”

For Matthew Goodwin, political scientist at the University of Kent, Europe's political systems “have never before been so unstable, with record levels of vote-switching and a loss of support for the mainstream”.

The value-divide between nationalists and cosmopolitans is “becoming as important as the traditional divide between left and right,” he said.

The performance of anti-elite, eurosceptic and populist parties in next year's elections in Italy, Hungary and Sweden will be an acid test of the scale of the challenge facing the EU.