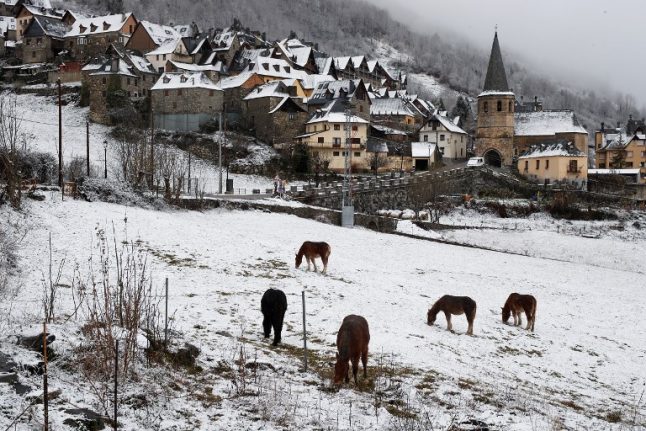 Horses graze in Gausac in the Aran Valley in northwest Catalonia. Photo: AFP

Speaking a form of the Occitan language like some of their neighbours in southern France, with a distinct culture, many residents of this Catalan district have firmly resisted calls for independence.

After crossing the Port de la Bonaigua mountain pass into this secluded area under heavy snowfall, the blue, red and yellow separatist flags hanging in other Catalan villages nearby are hardly anywhere. “This isn't Catalonia, this is different,” Amador Marques, a pastry chef who farms in his spare time, says at a small ranch that rears cows, geese, hens and baby goats.

“Older people, my grandparents and myself have always said that we're Aranese first, then Spanish.”

With just 10,000 residents in an area roughly the size of Madrid, Aran lies on the French side of the Pyrenees mountain range, but in 1313 it became part of the Kingdom of Aragon, which would later be absorbed into the  Spanish monarchy.

The Aranese, who were almost completely cut off from the rest of the country until the middle of the 20th century, have observed from afar the crisis between Catalonia's separatist leaders and Spain's central government.

In the last regional elections in 2015, they were the Catalan district that gave the least support to separatist parties, which nevertheless went on to win an absolute majority in the regional parliament.

And Bosost, Marques's village, was the municipality which gave the most support to anti-independence groupings.

“Here, we know what it's like to live with borders. And we don't want any more,” says Marques, 58.

Having grown up just a couple of kilometres from France, he remembers with bitterness the times he needed to show his passport just to sell wool in neighbouring villages on the other side of the border.

In his village of 1,100 residents, with stone houses with black slate roofs and where the Garonne river snakes its way to France, there are only a few posters for the regional elections on December 21st, and all are for parties against independence.

Called by Prime Minister Mariano Rajoy after Catalonia's parliament declared independence on October 27th, the elections are an attempt to “restore normality” to a region deeply divided over whether to break from Spain.

“Here, we're good the way we are, we don't mind being part of Spain. There is no Catalan feeling,” says Juan Francisco Pedarros, a 60-year-old butcher. 'Region within a region'

Much like Catalonia enjoys considerable autonomy within Spain, so the Aran Valley enjoys autonomy from the rest of Catalonia.

In 2015 the Catalan parliament voted the so-called Aran law which recognises that the district has the right “to decide its future”.

The Aran government manages its own health and social services, as well as environmental and tourism issues.

Aranese, Catalan and Spanish, meanwhile, are all taught in schools.

“We're basically a region within a region,” Carlos Barrera, head of the Aran government, says in his office in Viella, the local capital.

He says he believes that the Aran Valley's future goes hand-in-hand with that of Catalonia.

Some go even further, backing Catalonia's independence drive with the hope of one day securing independence for themselves.

“If we were selfishly intelligent, the valley would grab the opportunity of Catalonia becoming a state so that we could become one in the future,” says Alex Moga, Viella's former mayor. Still, there is concern that independence would leave the valley isolated again and would cause it to lose the economic benefits of the past decades, earned in large part through winter tourism.

“I don't think that the valley would want to continue as part of an independent Catalonia,” says Isabel Vivar, 59, in Gausac, a village next to Viella.

“Closing yourself in, as an area that is already closed in, isn't very appealing.”

She and her daughter work in the Baqueira-Beret ski resort, the area's main economic driving force.

Thanks to the resort, Aran went from having a subsistence economy to becoming one of Catalonia's richest districts.

King Felipe VI learned to ski on its slopes, and the area is popular with the Madrid jet set.

“We depend on Catalonia but we also depend on Spain and our main customers come from there, from Madrid. We can't disregard one or the other.”