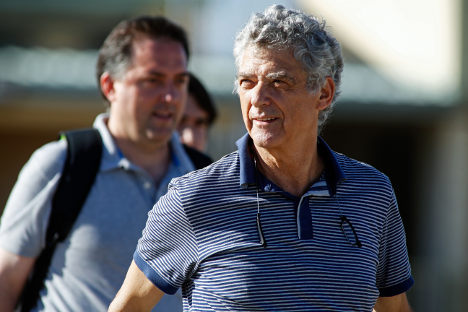 Angel Maria Villar, who was a senior FIFA and UEFA official, resigned after being arrested in July on suspicion of embezzling funds. Photo: Oscar Del Pozo/AFP

Earlier in the day Prime Minister Mariano Rajoy said Spain had received “no such letter from FIFA.”

The issue centres on the RFEF presidency. Angel Maria Villar, who was also a senior FIFA and UEFA official, resigned after being arrested in July on suspicion of embezzling funds. Villar was replaced, on an interim basis, by Juan Luis Larrea, another long-time football administrator.

Even though he is only a stand-in, Larrea has made clear he wants to see out Villar's term, which was due to end in 2020. The Spanish National Sports Agency (CSD) has objected and that prompted FIFA's warning, reported on Friday by the daily El Pais.

“We can confirm that FIFA recently sent a letter to the Spanish FA (RFEF) expressing its concern at the current situation in the association and reiterating that, under the FIFA Statutes, all member associations must manage their affairs independently and ensure that there is no interference by third parties in internal matters,” said a FIFA statement.

“FIFA is in contact with the RFEF, and a joint FIFA-UEFA delegation will be sent to Madrid shortly to monitor and assess the situation in the association,” the statement continued.

The RFEF and the Spanish government insisted on Friday that Spain would go to the World Cup in Russia.

“I just can't see that scenario,” Rajoy said at a press conference in Brussels. “I am absolutely convinced Spain will go to the World Cup, and will win.”

Rajoy said Spain's sports minister had told him the Spanish authorities had “received no official communication from FIFA but only a letter from a member of FIFA requesting a meeting.” He said his government's attitude was “exemplary.”

Villar was re-elected for an eighth term as president last May. He had run the RFEF for 29 years until his arrest on suspicion of creating a network of corruption in Spanish football.

Last month, Luis Rubiales, the former head of the players' union and an ally of Villar's put forward a motion of censure against Larrea with the objective of becoming president himself. That motion is scheduled for a vote
on January 16th.

At the same time, the Spanish cabinet, acting on requests from the CSD, demanded fresh RFEF elections because of irregularities in the vote last May. FIFA sees this as external political interference.