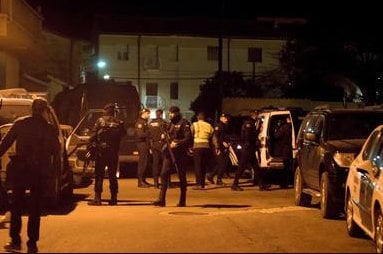 Officers at the scene in the aftermath of the shooting. Photo: Guardia Civil

“Two civil guards and a civilian” died during the incident at an isolated home in a rural area of the Teruel province around 6:00 pm (1700 GMT), a local official told AFP.

After a police operation being carried out throughout the night in the villages of Andorra and Albalate del Arzobispo, a man was arrested at around 5am in the nearby town of Cantavieja.

The suspect, whose name was not released, was taken into custody in the rural Teruel province where the triple slaying happened, local authorities told AFP.

Investigators were still working to establish a motive for the shooting at an isolated home Thursday, but local official Gustavo Alcade said the alleged killer was already being sought by police for a previous shooting.

The earlier incident, on December 5th, and involved an intruder breaking into a country house and wounding the owner as well as another person, according to local press reports.

The suspect, who police described as “a citizen of Serbian origin by the name of Norbert Feher,” was taken into custody in the rural Teruel province where the triple slaying happened, local authorities told AFP.

Several Italian Media said the man was nicknamed “Igor the Russian” and wanted in Italy for two killings last April near Bologna.