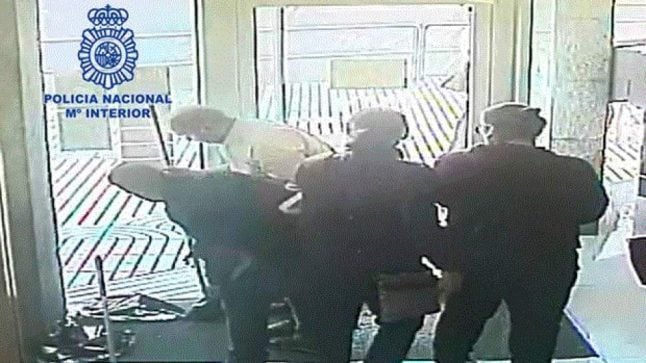 Police announced that they had arrested the group of five men after a robbery at a bank in Spain’s southern city of Cartagena was caught on CCTV and revealed the unusual modus operandi behind the crime.

In a carefully orchestrated performance gang members posed as strangers to each other, entering the bank in a series of disguises.

The charade began when one member of the group discreetly dropped a pile of dog excrement on the floor of the bank near the entrance and then spoke loudly to get the attention of both customers and bank staff while the rest of the group got to work.

Police described the details of the crime:  “They each took a different role; one was in a suit, another dressed as a youth in a hoodie and baseball cap, one was an old person, one a woman and another had his hair up in a ponytail.”

When one robber started complaining loudly about the mess on the floor, exclaiming “What a disgrace, don’t they do any cleaning?”, the bank manager came out of his office to deal with the fuss.

This left another alone in the office to steal what he wanted.

The group then left the bank calmly and went their separate ways.

Police said the gang are suspected of stealing €64,000 in a series of at least 15 other robberies carried out at different banks across Spain.