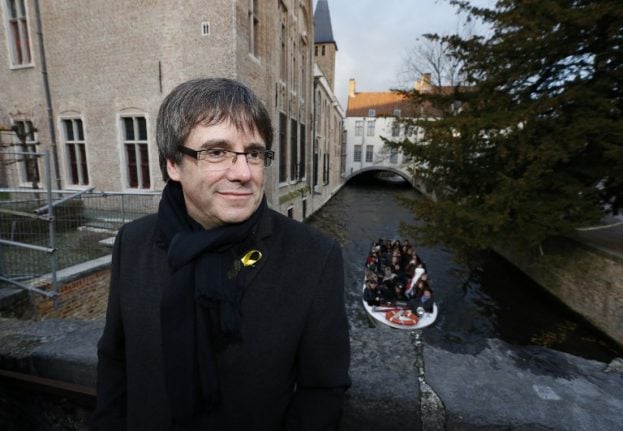 Catalan leader in exile Carles Puigdemont looks on during a visit to the city of Bruges last week. PHOTO: NICOLAS MAETERLINCK / BELGA / AFP
Puigdemont was sacked as Catalan president after holding a banned independence referendum and declaring, on October 27, that “Catalans have the capacity and the will to become an independent state. And on (December) 21, we must ratify this.”
Madrid imposed direct rule on the formerly semi-autonomous region to stop the independence drive.
Puigdemont, who is awaiting possible extradition to Spain where he is wanted on charges of rebellion, sedition and misuse of public funds, is running in the election at the head of the Junts per Catalunya (“All for Catalonia” in Catalan) grouping.
It comprises people from his conservative, separatist PDeCAT party as well as members of civil society.
“No matter what, they will be (in Brussels) till at least December 21 and according to my calculations this could go on till mid-January,”  lawyer Jaume Alonso Cuevillas told Catalan radio Rac1, referring to Puigdemont and four of his former ministers.
They all fled to Belgium in October, ignoring a summons to appear in court in Spain, claiming they would not get a fair trial.
“I am convinced that no matter what happens they will have recourse to an appeal,” the lawyer said.
Puigdemont had hoped to form a united separatist front for the new elections, as was the case in the region's last elections in 2015, when the pro-independence camp secured a majority of 72 seats in the 135-seat parliament, even though it won just 47.8 percent of the vote. But ERC — the party of his former vice-president Oriol Junqueras, who stayed in Spain and was remanded in custody by a judge investigating him and other former regional ministers on the same charges as Puigdemont — rejected a joint ticket.