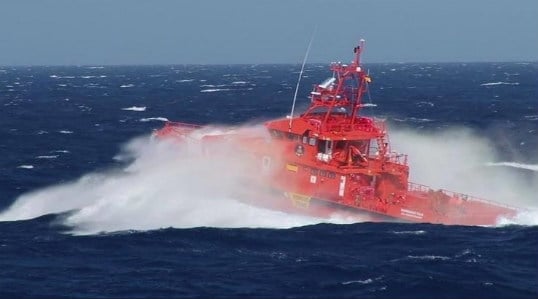 More than 3,000 people have died attempting to cross the Med into Europe this year. Photo: Salvamento Maritimo

The two men were rescued in the Strait of Gibraltar, where a helicopter picked up one man clinging from a half-sunken rubber dinghy and another helicopter recovered the second man as he swam nearby.

The men were thought to have been on a boat attempting to cross over to Spain from Morocco in rough waters, the spokeswoman said.

“One of the men who was rescued said there were originally six men aboard the boat, so possibly one is missing,” she said, adding that the search was continuing for the sixth man.

More than 3,000 migrants and refugees have died crossing the Mediterranean in a desperate bid to reach Europe's shores since the start of the year, the International Organization for Migration (IOM) said Tuesday.

The figure so far represents a 40 percent drop compared to last year's record of 5,000 known or suspected drownings.

The 3,033 deaths happened across three main sea routes in the Mediterranean.

Migrant arrivals to Spain have soared this year. According to the IOM, nearly 18,000 migrants reached Spanish shores by boat between January 1st and November 15th, compared to about 5,400 during the same period in 2016.