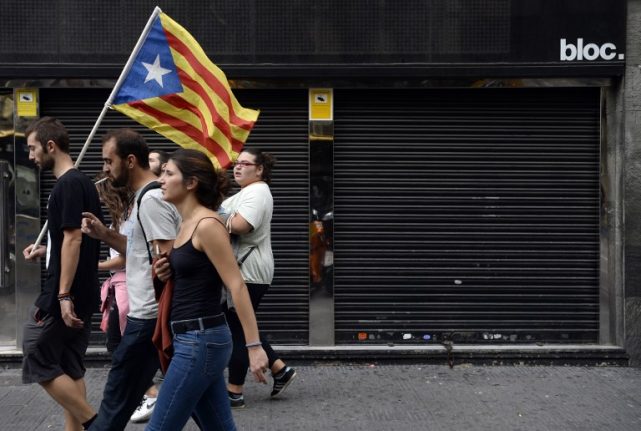 While tensions have eased somewhat since Spain's central government last month took direct control of the northeast region and has scheduled regional elections in December, many businesses in Catalonia still feel the need to guard against uncertainty.

The head of a small family-run wine and spirits business said he believes setting up a duplicate distribution firm for his goods in Madrid was the right move.

His company's sales have plunged by over 30 percent since Catalonia went ahead with a banned referendum on October 1st followed by the Catalan parliament unilaterally declaring independence.

The new distribution company allows him to slap his products — which continue to be made in Catalonia — with a Madrid address that he hopes will help sales recover.

“We won't sell anymore if we don't do this,” said the businessman, who like other executives in Catalonia did not want to be identified due to the sensitivity of the independence issue.

“This is a decision you take when you have no other choice,” he told AFP.

Over 2,700 companies have moved their headquarters outside of Catalonia since the referendum because of the uncertainty caused by the separatist drive and the boycott campaign, according to Spain's commercial registrar's office.

The moves are mainly administrative for now, but many fear the companies could eventually relocate staff and production outside of the region as well.

While the departure of listed multinationals, including Catalonia's two big banks, Caixabank and Sabadell, have grabbed the media spotlight, the exodus also includes small and medium sized firms.

In an upscale Barcelona neighbourhood a small drug distribution company with just 12 employees has accelerated a move of its headquarters which had already been planned to Seville, the capital of the southwestern region of Andalusia.

The company says its sales in Andalusia, where it earns the bulk of its turnover, have dropped 10-20 percent since the referendum.

“Patients say 'give me a product that is not Catalan'. This has never happened before,” the company's director told AFP.

The headquarters move also aims to ensure the company remains within the European Union's legal framework if Catalonia were to become independent one day.

“We would go bankrupt because the medicines we import would be subject to customs duties,” the director said.

READ MORE: Catalonia at risk of recession if crisis drags on, Bank of Spain warns

The majority of firms that have changed their headquarters were “afraid of a boycott”, said Enric Rius, a tax expert who has helped several companies make the move.

But he also pointed out that these are not complete relocations. The companies “keep factories, the management and jobs” in Catalonia, he said.

“If it affected me, I would leave but for now my business does not feel the effects,” said Francisco Castillo, the head of a transport firm near Barcelona

“Business is slow though, no one makes decisions, buys machines, in this context,” he added.

The decision to move headquarters is not always well received in Catalonia.

Aleix Pons i Coll, the vice president of mutual insurance firm Previsio, said he felt “anger and pain” when Catalonia's two big banks announced last month that they were moving their headquarters out of the region.

Previsio used to work closely with the two lenders but is now looking into other options, he said at his company's headquarters in Terrasa, about 30 kilometres (18 miles) north of Barcelona.

“Even reluctantly we may decide to no longer work with (banks) that leave, and to focus on those that remain,” said Pon i Coll.

He said he started to support independence in 2010 after Spain's Constitutional Court annulled parts of a statute that had granted Catalonia greater autonomy.7

A decree passed by Spain's central government in early October that makes it easier for companies to move their headquarters out of Catalonia has also fuelled resentment in the region.

But Madrid appears to be sending mixed signals. During a visit to Barcelona last week, Prime Minister Mariano Rajoy urged businesses not to abandon Catalonia.

“We see clearly that there was political pressure. How can we tell them not to go when everything was done for them to do so,” said Pons i Coll.

Few expect the regional elections called for December 21st in Catalonia will lead companies to move their headquarters back to the region.

“There is a perception that this society will continue to ignore laws, and that is dangerous for business activity,” said the head of the drug distribution company.