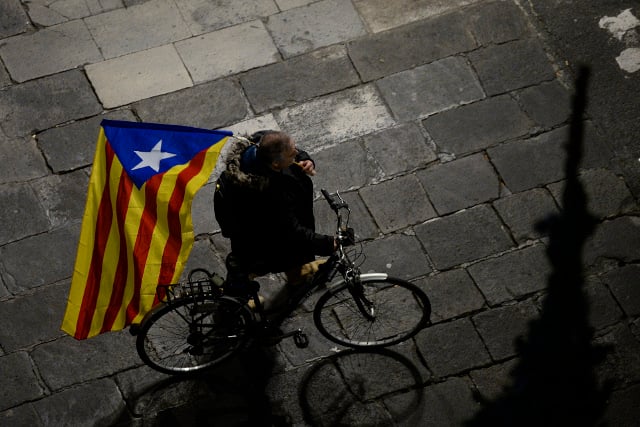 Spanish media have reported that Puigdemont's PdeCat party and its former government ally, the far-left ERC party, were planning to abandon a call for Catalonia to break away from Spain “unilaterally” in their programmes for a December 21 regional election.

“The draft follows this line. It is not finished. It seems like a good route to work on,” PdeCat party coordinator Marta Pascal said in an interview with Cadena Ser news radio when asked about the reports.

Catalonia “lacks two things” to declare independence, Pascal added: “That this be effective and above all to count on the support of more people.”

Madrid imposed direct rule on Catalonia and dismissed its government after the parliament of the once semi-autonomous region voted in favour of independence last month, and called the new elections in a bid to “restore normality”.

The assembly approved the independence declaration following a banned secession referendum on October 1, which sparked Spain's worst political crisis since the country returned to democracy after the death of longtime dictator Francisco Franco in 1975.

Regional authorities said 90 percent chose to split from Spain in the referendum, though less than half of eligible voters turned out in a region deeply divided on independence.

Puigdemont had hoped to form a united separatist front for the new elections, as was the case in the region's last elections in 2015, when the pro-independence camp secured a majority of 72 seats in the 135-seat parliament, even though it won just 47.8 percent of the vote.

But the ERC rejected a joint ticket, and opinion polls suggest that while it is leading in the current campaign, which officially opens on December 5, the independence coalition as a whole could lose its absolute majority.

The ERC has also said that the separatist movement needs to win more support for its cause, even though it takes a harder line on independence than the PdeCat party.

“The process of building a republic has started. We want this to be negotiated,” the ERC's spokesman in the Catalan parliament, Roger Torrent, told AFP, adding that the regional election next month would effectively be like another “referendum”.

“This is why we urge the Spanish government to accept the results,” he said.