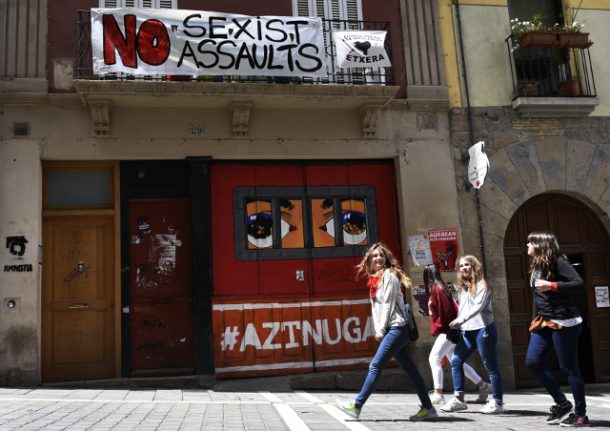 File photo from 2016 of a banner protesting against the growin number of sexual assaults during the bull-run in Pampona. Photo: Ander Gillenea/AFP

The trial of five men accused of carrying out the rape has dominated headlines in Spain at a time when several powerful men in the United States and beyond have fallen from grace following allegations of sexual misconduct, starting with movie mogul Harvey Weinstein.

The details of the Spanish case have shocked the country.

The five men, aged 27 to 29, are accused of having raped the woman, then aged 18, at the entrance to an apartment building in Pamplona on July 7, 2016 at the start of the nine-day San Fermin festival, which draws thousands.

The men, who are all from the southern city of Seville, allegedly filmed the rape and then bragged about it on a WhatsApp messaging group where they referred to themselves as “La Manada”, or “The Pack” in English.

Public prosecutors have asked that the five be sentenced to 22 years in prison each. The men say the woman consented to the sexual encounter but have admitted to stealing her mobile phone.

What is seen in the videos “does not imply consent or the opposite interpretation,” the lawyer for three of the accused, Agustin Martinez Becerra, told reporters.

The judge's decision to admit as evidence details about the victim's private life gathered by a private detective — including her presence at a party a few days after the alleged rape — has added to anger over the case.

The phrase “I believe you” has appeared on social media as well as on walls in Madrid and signs held up at protests across the country in recent days in support of the alleged rape victim.

Spanish author Almudena Grandes said in a radio interview there was an attempt to “raise doubts” about the alleged victim's “morals because she dared to go out, have drinks with friends, after having been raped, instead of staying at home with the blinds drawn.”

The victim's lawyer, Carlos Bacaicoa, said she has “the right to try to rebuild her life and above all try to pretend that nothing happened.”

Hundreds of protesters, many carrying signs that read “Try the accused not the victim”, have gathered outside the Pamplona courthouse where the trial is being held.

Laura Nuño Gomez, a lawyer who runs the gender equality observatory at Madrid's King Juan Carlos University, said the case has sparked protests because it is part of an “accumulation of setbacks” for women's rights in Spain recently.

Gomez cited as an example the high-profile case of Juana Rivas, a woman from the southern region of Andalusia, who was ordered by a court to hand over her two children to their Italian father who she accuses of having beat her.

Women who are sexually abused in Spain “regularly face prejudice on the part of the authorities who question their testimony,” Amnesty International said Thursday in a statement.

“It is very hard to be the victim of a rape and have to go through all of that, to be judged not just by a judge but the whole society,” Maria Silvestre, a sociologist at Bilbao's Deusto University who focuses on violence against women, told AFP.

The case has led other women to come forward about having been raped. In an article published in online newspaper El Diario, journalist Ruth Toledano recounted in detail how she was raped by a stranger 20 years ago.

“I am telling my personal experience to show that no one can decide how a free woman should behave and live, neither before nor after a rape,” she wrote.