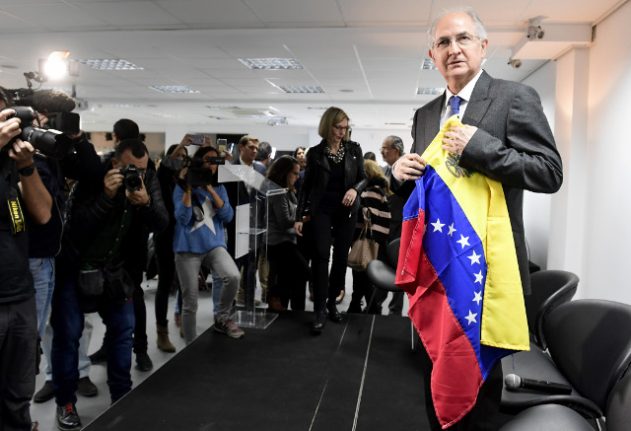 Antonio Ledezma, 62, arrived in Madrid on Saturday after escaping house arrest and fleeing to Colombia, saying he would help organise resistance to Maduro's increasingly authoritarian rule which has left millions facing food and medicine shortages.

“We haven't come here to enjoy a golden exile, we have come here to work,” Ledezma told reporters in Madrid, alongside former Colombian president Andres Pastrana and Albert Rivera, the head of Spain's centre-right party Ciudadanos.

“Get ready Maduro, because you're now going to hear the roar of the engines of Venezuelan exile, which is going to get organised around the world to make the truth known,” he said.

A lawyer by profession, Ledezma was arrested and jailed in February 2015 over allegations he was plotting to overthrow the president, and had been under house arrest since August following surgery.

He said he managed to reach Colombia last week thanks to the “cooperation” of members of Venezuela's military, adding that he would not feel “free until all political prisoners are released” in his country.

Ledezma also accused the Venezuelan government of being “an accomplice of drug trafficking” and of letting “300,000 children be under-nourished”.

Last Friday he said he had fled Caracas because Venezuelan military and intelligence officials had informed him of a “government plan” against him, though he provided no details.

Oil-rich but cash-poor Venezuela is facing a deepening political and economic crisis as Maduro has moved to marginalise opposition forces, which control the country's legislature, and stifle independent media.

This month the government signed a deal with Russia to restructure foreign debt of some $150 billion after it was hit hard by falling oil prices and sanctions imposed by Washington, which has labelled Maduro a “dictator”.