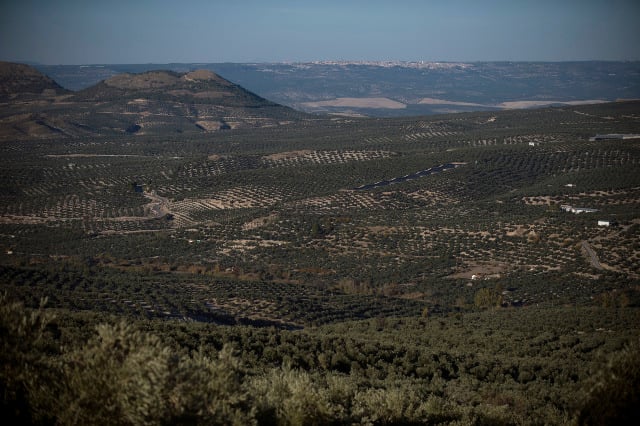 Nearly all of Portugal has suffered extreme drought conditions during the last six months, which has not happened since 2005. A majority of Spain has also received considerably less rain than it normally would.

Due to the scarcity of grass, Gonzalez was forced to spend thousands of euros to buy fodder for his cattle in July, four months earlier than normal.

“There are rivers, springs, which neither I, at the age of 45, nor my parents, nor my grandparents, have seen dry which have dried up,” he said.

About 1.38 million hectares (3.4 million acres) of grains, sunflowers and olive trees have been affected by drought or frost in Spain as of the end of October, according to Spanish farming insurance agency Agroseguro.

It has dished out more than 200 million euros ($236 million) in compensation this year.

“You feel helpless like when you are sick, you can't do anything. This sickness is called drought,” said Vicente Ortiz, a farmer and rancher in Spain's central Castilla-La Mancha region, whose endless plain is depicted in “Don Quixote”, the most famous work by Miguel de Cervantes.

Ortiz said his grain harvest has plunged 70 percent from last year and he expects to harvest half as many olives.

The situation is just as dire for farmers across the border in neighbouring Portugal.

“All crops are suffering from this lack of water in our region, from olives to grains and grapes,” said Fremelinda Carvalho, the president of the association of farmers on Portalegre in central Portugal.

The dry fields and forests have fuelled wildfires, which killed 109 people this year in Portugal and five in Galicia, many dying in their cars as they tried to flee the flames.

In Portugal 28 of the country's water reservoirs in October were at less than 40 percent of their storage capacity.

This weekend about a hundred fire trucks began transporting water from one dam in northern Portugal to another that is running dry and supplies water to Viseu, a city of around 100,000 residents.

In Spain the water reservoirs along the Tagus River, which empty into the Atlantic near Lisbon, were as of November 13 at less than 40 percent of their capacity.

The levels were even lower in the Douro River further north and the Segura River, which is used to irrigate crops in southeastern Spain.

Spain's largest power company, Iberdrola, saw its hydroelectric power production plunge 58 percent during the first nine months of the year, compared to the same time last year, due to the lack of water which has pushed up electricity prices.

The drought is fuelling conflicts among regions over the use of water.

For example a massive aqueduct built in the 1960s during the Spanish dictatorship of Francisco Franco to siphon off water from the Tagus River to the smaller Segura River is now a source of tension.

The Tagus River “can not support” this aqueduct, said Antonio Luengo, the head of the agency that regulates water in Spain's Castilla-La Mancha region.

The water that was diverted from the Tagus was used to massively develop fruit and vegetable farms in southeastern Spain and now water from the Mediterranean must be desalinated to support these crops, he said.

Experts warn droughts are likely to become more frequent and severe in the region.

“Spain has since 1980 shown signs of climate change, which have increased since 2000,” said Jorge Olcina, a geographer who heads the University of Alicante's climate institute.

The country's climate “tends to have more subtropical characteristics. Higher temperatures and rarer and more intense rains. So climate-related risks — heatwaves and rain and droughts and floods, will increase in the coming decades,” he added.

He cited as examples the use of water to irrigate trees that do not normally need much water such as olive and almond trees, and the planting of water intensive crops that are not suited to Spain's Mediterranean climate.

Both governments have promised financial aid to farmers, who still anxiously wait for rain.

“We are constantly looking at the sky,” said Ortiz, the rancher in Castilla-La Mancha.