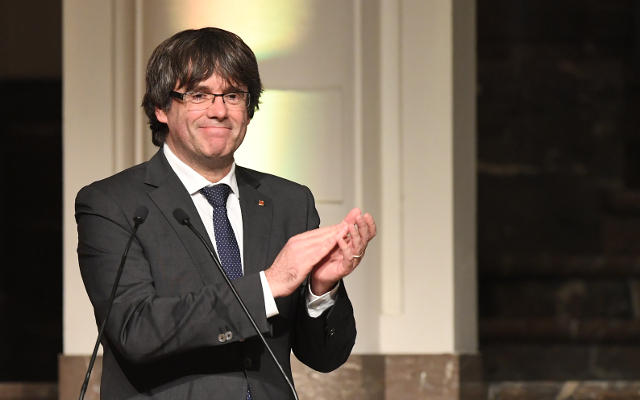 Of the 14 members of the Catalan government who were dismissed by the central government in October, 12 are on the two main separatist lists, the “Together for Catalonia” group of sacked president Carles Puigdemont and the Republican Left of Catalonia (ERC), led by his vice president Oriol Junqueras.

Seven of the former officials, including Junqueras, are currently jailed pending an investigation into charges of rebellion, sedition and misuse of public funds, while Puigdemont and four others are in Belgium fighting an extradition request filed by Spain.

Prosecutors in Brussels asked a judge Friday to extradite Puigdemont and the others, and a new hearing has been set for December 4th.

But a final decision could still be months away, as both sides are expected to appeal if the judge rules against them, which means Puigdemont might be out of the country when the Catalonia vote is held.

Junqueras and the others being held may be released before the election.

Puigdemont presented on Twitter the lists backed by his conservative PDeCAT party, saying the candidates supported “independence, the republic and freedom”, as well as the restitution of the regional government and “a return of political prisoners and exiles”.

He had hoped to form a united separatist front for the new elections, as was the case in the region's last elections in 2015, when the pro-independence camp secured a majority of 72 seats in the 135-seat parliament.

But the ERC rejected a joint ticket, and opinion polls suggest that while it is leading in the current campaign, which officially opens on December 5th, the independence coalition as a whole could lose its absolute majority.

Madrid has imposed direct rule on the once semi-autonomous region since the independence declaration made after a banned referendum on October 1st, and called the new elections in a bid to “restore normality”.

Regional authorities said 90 percent chose to split from Spain, though less than half of eligible voters turned out in a region deeply divided on independence.