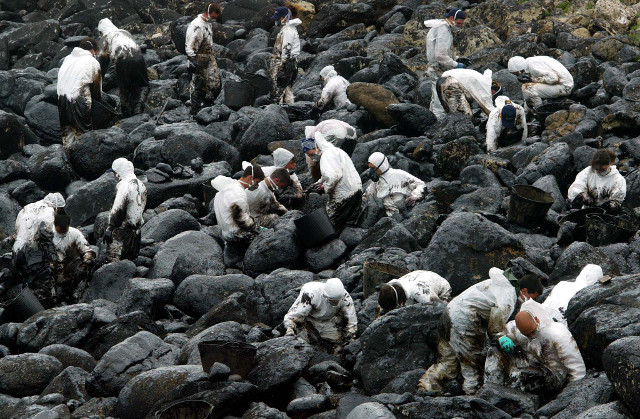 Volunteers cleaning up the oil-polluted rocks in the aftermath of the Prestige spill. Photo: Miguel Riopa/AFP

The court in the northwestern Spanish city of A Coruña also said the regional government of Galicia, off whose coast the Prestige tanker sank, be compensated 1.8 million euros and neighbouring France, which was also affected, 61 million euros.

The ship's Greek captain Apostolos Mangouras and British insurers The London P&I Club were ordered to pay one billion dollars, the court said in a statement — the maximum limit fixed by the company in its contract for the ship.

The rest must be paid by ship owner Mare Shipping Inc. and the International Oil Pollution Compensation Funds, a grouping of two inter-governmental organisations that provide compensation for environmental damage resulting from spills.

The Prestige tanker ran into trouble in rough seas in November 2002. Six days later, damaged and adrift, it broke in two and sank off the coast of Galicia.

The accident saw 63,000 tonnes of oil spill into the sea and blacken 2,980 kilometres (1,852 miles) of shoreline in Spain, France and Portugal with sludge.

The spill caused huge damage to wildlife and the environment, as well as to the region's fishing industry, leading to an international cleanup effort.

The court also awarded damages to more than 260 other aggrieved parties such as town halls, but has yet to publish the total amount.

The total cost of the damage had been estimated at 4.1 billion euros.

In January 2016, Spain's Supreme Court sentenced the captain to two years' jail, accusing him of “gross negligence” for having sailed at a time when bad weather was possible, knowing that the ship was old and that the automatic pilot no longer worked, for instance.

Environmental campaigners Greenpeace said the captain was made a “scapegoat”. They complained that other key players in the disaster were not in the dock — including current Prime Minister Mariano Rajoy, who was deputy prime minister at the time.

His conservative Popular Party government had ordered the Prestige out to sea away from the Spanish coast instead of following an emergency plan that called for it to be brought to port where the leaking oil could be confined.

Among evidence provided in the latest court case were notes from the Prestige's former captain, Stratos Kostazos, who had complained the tanker was in bad shape and had refused to sail in it.

The Supreme Court said that two major energy companies — Spain's Repsol and Britain's BP — had advised against using the Prestige tanker, a 26-year-old vessel with a carrying capacity of 81,000 tonnes.

It added that a man who had worked for the company that managed the Prestige said the owners of the ship knew what state it was in and had dispatched it to Saint Petersburg to “die.”

“But… it was decided it would make another sea crossing, which really was its final one,” the Supreme Court said in its January 2016 ruling.