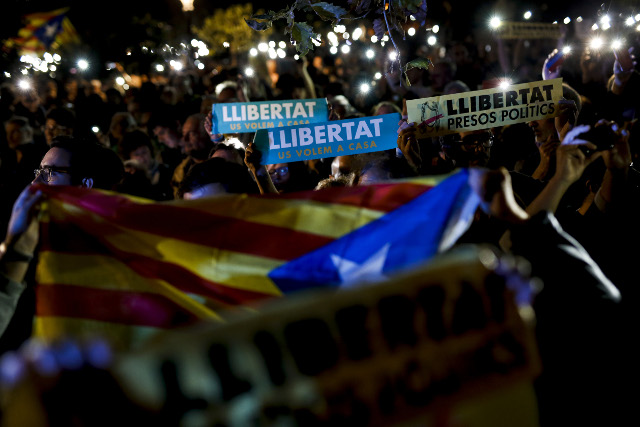 “You know why we aren't independent yet?”, asked Joan Tarda, a national lawmaker for Catalonia's leftwing ERC separatist party, earlier this week.

“Because a majority of Catalans didn't want it,” he said just over two weeks after the regional parliament declared independence, a move that sent shockwaves through Spain and Europe.

After the declaration on October 27, Madrid imposed direct rule on the once semi-autonomous region, sacked the Catalan government, dissolved its parliament and called elections for December 21 in a bid to “restore normality.”

At the time, many wondered whether separatist parties would participate in the vote. They eventually announced they would.

Catalonia's sacked leader Carles Puigdemont even said on Monday there could be solutions other than independence for the region.

In an interview with the Le Soir newspaper in Belgium, where he travelled to last month just before being summoned to a Madrid court on suspicion of rebellion and sedition, Puigdemont insisted he was still open to “agreement” with the Spanish government.

As such, Catalonia's three separatist parties — the far-left CUP, ERC and Puigdemont's conservative PDeCAT — are gearing up for an unprecedented campaign.

Their main leaders are either in detention in Spain pending an investigation into charges of rebellion, sedition and misuse of public funds, or in Belgium where they await possible extradition.

In the next few weeks, they are due to craft a new roadmap for their supporters after the failed independence bid.

They're “not giving up on independence, but they're no longer setting a date,” says Gabriel Colome, a politics professor at the Autonomous University of Barcelona.

In the last regional elections in September 2015, after obtaining an absolute majority in the Catalan parliament, the ruling separatists had promised to break away from Spain within 18 months.

Now, they have several other options at hand, says Ferran Requejo, a politics professor at the Pompeu Fabra University in Barcelona, including negotiating with Madrid to hold an independence referendum — legal this time — like the one held in Scotland in 2014.

The current separatist crisis was sparked when Catalan leaders held a referendum on October 1 without Madrid's consent, prompting police to intervene and in some cases violently repress the vote.

Regional authorities said 90 percent chose to split from Spain, though less than half of eligible voters turned out in a region deeply divided on independence.

The other option, says Requejo, would be “a bilateral agreement for negotiations to find a model, without breaking with the state, in which the autonomous government would take the main decisions at a political, economic and cultural level.”

This time round, though, separatist parties are not running on the same ticket, as they did in 2015.

But the challenge still remains for all three parties to keep the absolute majority they obtained in 2015 with 72 regional lawmakers out of 135, and get more than the 47.8 percent of votes they won at the time.

“We must obtain a wider majority” to be in a position to demand negotiations with the Spanish state, says an ERC member, who wishes to remain anonymous.

He says the independence drive was dropped as any resistance to the “repressive” action of Madrid, which took direct control of Catalonia, could have “sparked a bloodbath that isn't acceptable here.”

ERC, which leads in the opinion polls ahead of the elections, has announced it will join Puigdemont's list “Junts per Catalunya” (“Together for Catalonia” in Catalan) on some issues such as fighting for the release of those currently in custody.

This issue has galvanised independence supporters, hundreds of thousands of whom regularly take to the streets.

Oriol Bartomeus, a politics professor at the Autonomous University of Barcelona, says that “voters, at least the core, still have confidence in separatist leaders.”

But “until when?” wonders Colome.

Meanwhile, he says, it's going to be a tough election race, as those in favour of remaining in Spain “will go vote en mass”.