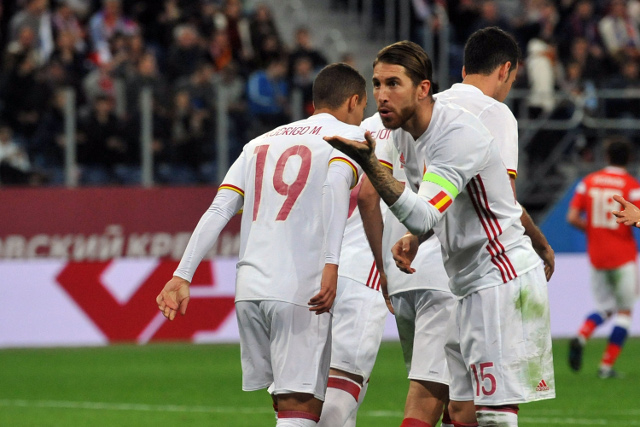 Barcelona full-back Jordi Alba's strike and Ramos' first spot-kick put the visitors in control, but goals either side of half-time from Fedor Smolov and Alexei Miranchuk pulled Russia level.

Spain still extended their unbeaten run under Lopetegui to 15 matches.

“Russia haven't played any competitive games and their players worked flat out in every single friendly match. But we also played well tonight. Both of our recent friendlies have been very useful for our team.”

The 2010 World Cup winners, fresh from Saturday's 5-0 victory over Costa Rica in Malaga, dominated posession early on and Alba put the away side into a ninth-minute lead by heading in a Marco Asensio cross.

Ramos made it two in the 35th minute after Zenit midfielder Daler Kuzyayev handballed in the area.

Krasnodar forward Smolov halved the deficit four minutes before the break, when he received a pinpoint pass by Miranchuk in the area and fired the ball past David De Gea.

Ramos completed only his second international brace after scoring two against San Marino in 2005, but Smolov equalised again with a powerful strike from just outside the area with 20 minutes to go.

Spartak Moscow midfielder Denis Glushakov was forced to go in goal in injury-time after keeper Andrei Lunev was knocked out in a clash with Rodrigo, but Spain failed to find a winner.

Russia wing-back Konstantin Rausch, who plays with German Bundesliga side Cologne, said he was happy with his team's performance.

“I'm really pleased that today we showed true team spirit,” he said. “After Spain claimed a 2-0 lead we continued fighting and it paid off.

“We've all been battling hard for every single ball tonight. It was a good game for our team.”