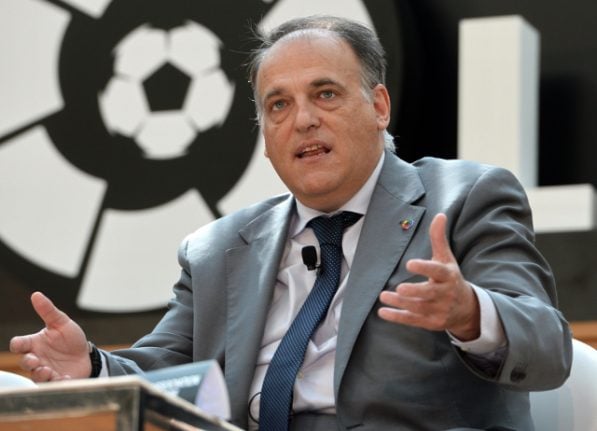 Tebas told a press conference he hoped to seal a new deal by March 2018 and that the sum included feees for domestic and international broadcasting rights.

“I believe we will reach 2.3 billion euros,” he said before voicing his concerns over the potential costs of Catalan independence.

“We are in the middle of a problem that could have a massive impact on the value of our competition,” he said over fears that the three La Liga outfits — Barcelona, Espanyol and Girona — would leave the Spanish league should the Catalan region eventually gain independence from Spain.

In a wide-ranging presser, Tebas had harsh words not only for Manchester City and Paris Saint Germain, whom he accuses of “financial doping”, but also for FIFA and UEFA.

“I'm very worried about private institutions such as UEFA and FIFA who are taking decisions without consulting the national leagues,” Tebas said.

With regards to PSG and City Tebas was blunt: “I don't think they are cheating, I know they are.”

The vocal La Liga president also said he believed Barcelona star Lionel Messi had signed a new contract, although neither the club nor the player have said so.

“Messi has renewed his deal, at least that's what Barcelona have suggested to me. Contracts are official once they are signed, not when the club announces it has been signed,” he said.