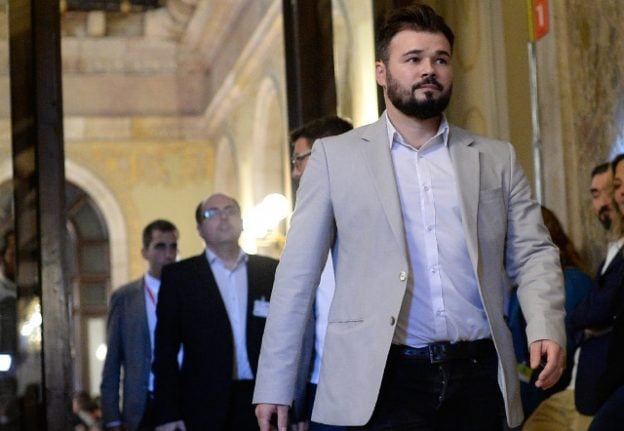 “Minister, do you know what this is?” Catalan Republican Left (ERC) politician Gabriel Rufián asked Juan Ignacio Zoido while brandishing handcuffs, provoking such a loud response in the chamber that speaker Ana Pastor had to repeatedly ask for silence.

“I know that some would love to see me in these one day, have a bit of patience,” Rufián quipped in reference to the scoffs from ministers.

“Minister, look, do you know what this is? It's your politics, your electoral program, the kind of dialogue you applied to our colleagues, the legitimate Catalan government. This is what was put on their wrists before putting them in a police van, parading them through Madrid, insulting them then imprisoning them in Estremera and Alcalá Meco,” he insisted.

Several former Catalan cabinet members are currently detained over their role in the push for separation, deemed illegal by Spain's constitution. The region's executive was dissolved by PM Rajoy in response to a unilateral declaration of independence.

“You've made your prisons our nightmare, we'll make our ballot boxes yours,” Rufián threatened, in reference to the forthcoming December regional election in Catalonia which is predicted to be divided down pro-independence and pro-union lines.

“Hopefully one day we'll see (PM) M. Rajoy in a pair of these,” he concluded.

“Nothing comes for free. Those who disrespect security forces have to answer for their actions”, a nonplussed looking Zoido responded.

The Interior Minister ended his reply by reminding Rufián that in 2015 the ERC politician had promised to leave Congress within 18 months to return to an independent Catalonia, to which the Catalan responded by putting his jacket on and leaving the chamber – but only after making a mock military salute.

Known for his outspoken nature and theatrical style, Rufián has used props in Congress before, including a printer, newspaper clippings and banners.