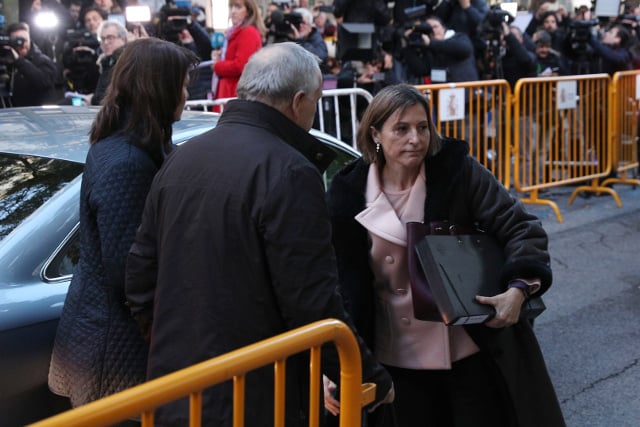 Carme Forcadell arriving at the Supreme Court in Madrid on Thursday. Photo: STR/AFP

Carme Forcadell spent the night in jail over her role in the region’s independence drive.

A judge at Spain's Supreme Court had on Thursday ordered Carme Forcadell to be detained on charges of “rebellion” – which carries a maximum jail term of 30 years – until she paid the amount.

A source said Forcadell arrived at the Alcalá Meco jail near Madrid after midnight.

Her lawyer said he was confident his client “could be freed” on Friday after the bond is paid.

The influential pro-independence lobby group ANC said it would come up with the cash, calling on members to contribute in solidarity with Forcadell and other former Catalan officials.

Just before lunchtime on Friday, Catalan media reported that the bail amount had been paid and Forcadell would leave jail within the coming hours.

In response, Madrid fired Catalonia's government and parliament, suspended the region's autonomy and called new elections there next month.

Forcadell appeared at the Supreme Court in Madrid on Thursday along with five former Catalan lawmakers.

She left the court in a police van, but the others were given a temporary reprieve by the judge, who said they must pay 20,000 euros each within a week or be detained.

“Thank you very much to all of you for your support, warmth and esteem,” Forcadell said on Twitter.

Writing on Twitter, deposed Catalan president Carles Puigdemont, who is in self-imposed exile in Belgium, said Forcadell had “to sleep in jail for having allowed a democratic debate.”

A lifelong advocate of Catalan independence, Forcadell insists that as parliamentary speaker she didn't “have the freedom to stop” the October 27 vote that saw lawmakers back a break from Madrid.

Eight members of Puigdemont's former cabinet were detained last week on charges of sedition, rebellion and misuse of public funds for their role in the independence push.