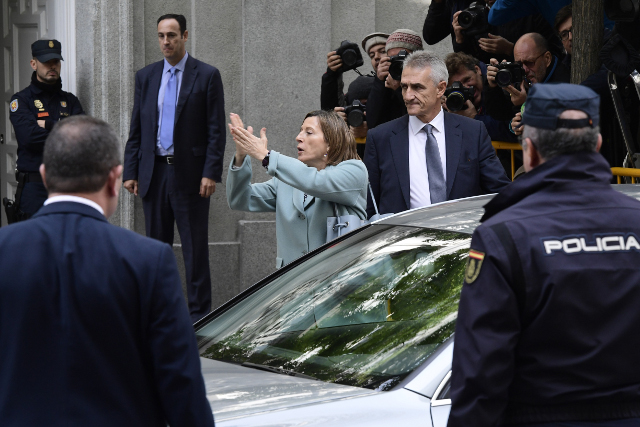 Catalan parliament speaker Carme Forcadell, 58, and five other elected officials will go before a Supreme Court judge on Thursday morning. The court has the power to decide if they are guilty of rebellion, sedition and embezzlement with a view to declaring independence.

They are suspected of having followed a “concerted strategy to declare independence”, before the official declaration of the Catalan parliament on October 27th, which was annulled Wednesday by the Constitutional Court, in the most serious crisis in Spain in 40 years of democracy.

The magistrate could decide to place them in pre-trial detention, joining the majority of Catalan leaders who organised a referendum on independence last month.

A judge in Madrid last week ordered eight separatist politicians to be remanded in custody over their secession drive.

Conspicuously absent in court will be the region's deposed leader Carles Puigdemont and four of his former ministers, who travelled to Belgium after the central government imposed direct rule on Catalonia following the regional parliament's declaration of independence.

The 54-year-old has ignored a summons to appear before a judge in Madrid, saying he wants guarantees he will receive a fair trial.

Belgian Prime Minister Charles Michel on Wednesday denied that his government was “in crisis” over Puigdemont's presence, after Flemish separatist members of his coalition government spoke out in support of Catalan independence.

Protesters blocked roads, highways and train tracks in Catalonia on Wednesday as part of a region-wide strike called by a pro-independence union.

The walkout was called by the CSC union but lacked support from Spain's two largest unions.

Main highways, including Spain's export route to France and the rest of Europe, were cut in about 60 places causing widespread disruption in the region.

Protesters draped huge banners across at least one tunnel in Barcelona, blocking entry, and activists also cut off main roads linking the region of 7.5 million people to France and to the Spanish capital Madrid.

French authorities said that the border was blocked at the Spanish town of Puigcerda and that other major routes were cut around Figueres, north of Barcelona.

Despite the disruptions, the work stoppage was on a smaller scale than a general strike on October 3.

On October 1, Catalonia held an unregulated referendum — marked by a heavy-handed operation by Spanish police — that saw a large majority in favour of seceding from Madrid. Turnout was just 43 percent, however, and Spain's top court ruled the plebiscite illegal.

Juan Antonio Puigserver, an interior ministry official, said participation in Wednesday's strike had been “minimal” in most sectors.

The independence crisis has further shaken the European Union which is still getting to grips with Britain's shock decision to leave the bloc, and raised fears of social unrest as well as prolonged disruption to the eurozone's fourth-largest economy.

More than 2,000 businesses have moved their legal headquarters out of Catalonia as the turmoil drags on.

Fresh elections will be held in Catalonia on December 21 and Rajoy called on Wednesday for “massive participation” in the vote.

Puigdemont has called for a united separatist front to participate, but a former government ally, the leftwing ERC party, on Tuesday ruled out running on the same ticket.

Although the separatists won a majority of seats in 2015, they captured less than half of the votes cast, and polls show Catalans remain split over independence.