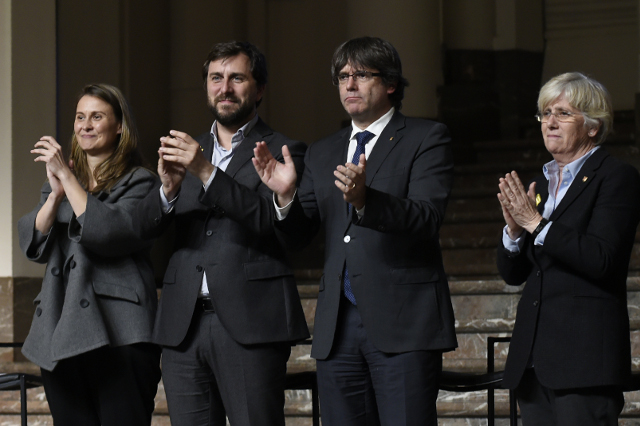 Belgian Prime Minister Charles Michel was forced to deny Wednesday that there was a “political crisis” in his country over the deposed Catalan leader's flight from Spanish justice.

READ ALSO: Political crisis is in Spain, not Belgium according to Michel

While Puigdemont said he wanted to bring the Catalan problem to the heart of Europe, he has also injected it into a country split between French and Dutch-speaking populations.

The Catalonia issue has given a boost to separatists in Belgium's wealthier, Dutch-speaking Flanders region in the north, who are part of the delicate coalition led by francophone Michel, which has been in power since 2014.

It has also caused tensions between Brussels and Madrid with Flemish politicians comparing the Spanish government to the regime of General Francisco Franco and Spanish politicians denouncing the leading Flemish party's past links to Nazis.

“We are far from governmental breakdown but it is still a difficult problem to sort out, a thorn in the foot for the government of Charles Michel,” Pascal Delwit, a political science professor at the Université libre de Bruxelles, told AFP.

'Oil on the fire'

Belgium's internal politics are notoriously shaky, with the country holding the world record for the longest time without a government, a whopping 541 days in 2010-2011.

But Puigdemont has not been afraid to play on that. Appearing in front of 200 Catalan mayors in Brussels on Tuesday, his first act was to thank the N-VA (New Flemish Alliance) party, which eventually wants a separate homeland in Flanders.

The N-VA has from the start shown its support for Puigdemont, who is the subject of a European arrest warrant filed by Spain on charges of sedition and rebellion, and backed the cause of the Catalans, whom they see as bearing a similar economic burden while being denied independence.

Belgian Immigration Minister and key N-VA figure Theo Francken had raised the possibility of Puigdemont getting asylum in Belgium days before the Catalan ex-leader arrived in the country.

Michel, who hails from the southern French-speaking region of Wallonia, at the time ordered his ministers “not to throw oil on the fire”, but they ignored him.

On Sunday Interior Minister Jan Jambon, also of the N-VA, criticised the “deafening silence” by the EU on the crackdown by one of its member states.

The party's chief, Bart De Wever, then blasted the “Francoist” behaviour of Madrid – and found an unlikely ally in the socialist former prime minister Elio Di Rupo, who made a similar comparison.

A problem for Michel is that the longer Puigdemont is in Belgium the worse the problem will get — and that could be months, while Belgian judges decide whether he can be extradited to Spain.

Belgium's strained relations with Madrid could then also be thrown further into question.

“If the judges take a decision that goes against the Spanish request, then you've got a crisis,” said political scientist Emilie Van Haute, also of the ULB.

'Keys to the car'

Nevertheless, Belgium's “marriage of reason” between four political parties does not seem in mortal danger yet, analysts say.

No one — including the Flemish nationalists, the liberals or the Flemish Christian Democrats — wants to bring the house down two years before the next elections.

Flemish voters would not understand the N-VA “committing hari-kiri”, said Bruno Yammine, a historian of the Flemish movement.

“The hard base of nationalists in Flanders is 10-15 percent of the population — that isn't suddenly going to become 40 percent because of Catalonia,” said Yammine.

In the eyes of many the party is essentially a classic conservative party that concentrates on themes like security, terrorism and immigration.

Instead the N-VA seems to be using the Catalonia issue for political capital, kicking into the long grass for now its stated aim of the creation of an “independent republic of Flanders.”

Paul Dermine, a specialist in public law, said that “the Flemish don't talk much about independence” and that “what is happening in Catalonia has no chance of happening in Belgium.”

The N-VA “want a strong Flanders that dominates the Belgian state and that's definitely the case at the moment”, he said.

“They have the keys to the car, and they're very happy with that.”