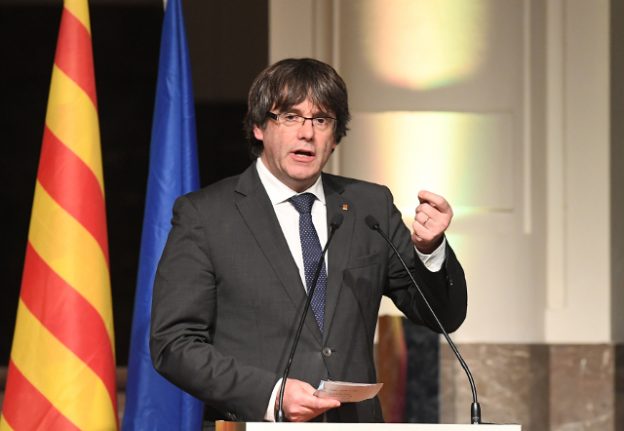 “Will you accept the result of the Catalan referendum or will you continue to help Mr Rajoy in his coup d'etat?” Puigdemont said to the presidents of the European Parliament and European Commission at a meeting with Catalan mayors in Brussels.

It was Puigdemont's first public statement since he was freed on bail on Sunday by a court in Belgium, where he fled after he was dismissed by Madrid when his government declared independence from Spain.

Puigdemont and four other former ministers could now find themselves still in Belgium when Catalonia holds regional elections on December 21st, waiting for a judge to decide on a Spanish arrest warrant against them.

The five separatist leaders were guests of honour as more than 200 pro-independence Catalan mayors gathered in Brussels on Tuesday in a show of support at the feet of the EU's institutions.

To applause from the Catalan politicians, Puigdemont described Catalonia as “the only territory in Europe where there is this democratic anomaly” of an elected regional parliament banned from exercising its power.

“Mr Juncker and Tajani, is this is the Europe that you want to build… with a country that puts leaders in prison?” Puigdemont said, referring to European Commission President Jean-Claude Juncker and European Parliament head Antonio Tajani.

He also said that Europe's values were best defended by “those who protected the ballot box” during the banned independence referendum on October 1st, when a violent police crackdown on Catalan voters shocked the world.

Puigdemont thanked the Catalan mayors for their support, as well as “our friends in the Flemish N-VA party who are with us today” referring to the Belgian separatist party.

When he arrived in Belgium on October 31st, Puigdemont denied he would seek asylum to avoid rebellion charge or interfere with Belgian politics.