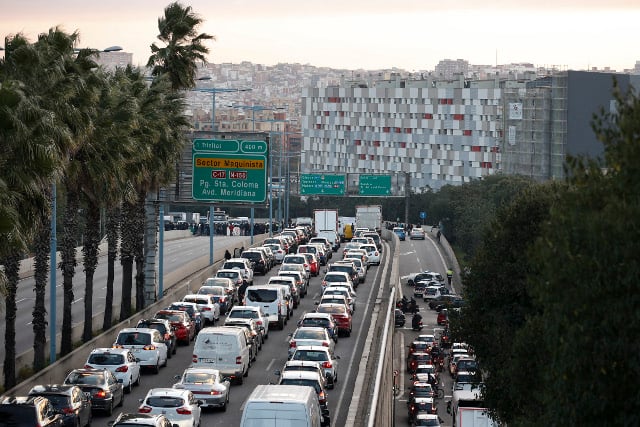 Picketers block a road in to Barcelona on November 8th. Photo: Pau Barrena/AFP

On Wednesday morning the A-2 and AP-7 highways were closed at several points in or around Barcelona, as was the busy Ronda de Dalt ring road.

According to the Catalan transport authority, a total of 66 sections of roads were affected by 10am, with the locations ranging from Barcelona to Tarragona, Lleida and Girona. The C-32 in Sitges towards Barcelona. Photo: Teresa Esteve Railways were also disrupted significantly, and trains were stopped between Barcelona and some nearby towns. In Girona, around 500 protesters entered the AVE high-speed railway station and blocked the tracks by standing in the middle of them with signs calling for “freedom for political prisoners”. The line links Spain with France.

Other local lines between Barcelona and Terrassa, Sabadell and Girona have also been impacted, while in Tarragona access to the port was blocked by protesters.

Some schools may also take part later in the day, while workers at Catalunya Radio said they would participate, and La Liga club Girona closed its offices.

The strikes are not backed by Spain's two biggest unions, and as walking out of work for political motives is not legal in the country, it has technically been called by Catalonia's CSC union to protest job concerns caused by companies moving their legal headquarters from the region. A sign hanging on one of Barcelona's ring roads rads “Against repression, not one step backwards. We are a republic. General strike”. Photo: Josep Lago/AFP

Banners and flags displayed by protesters left little doubt that they were speaking out about more than work however.