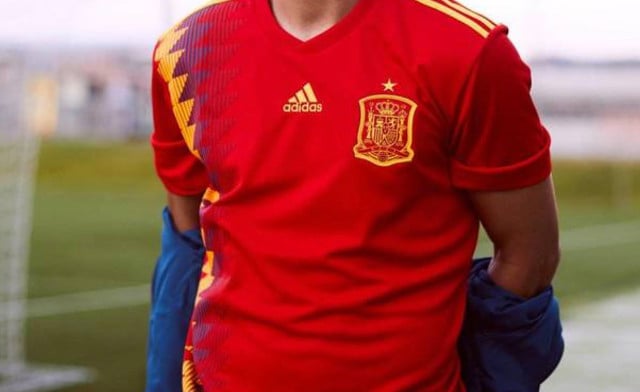 On Monday, the Royal Spanish Football Federation (RFEF) presented the new Adidas kit that the national team will wear during the forthcoming World Cup in Russia, and Twitter users were quick to spot a striking detail.

While the main colour of the shirt is red as usual, a striped section running down the side appears (in photographs at least) to be yellow and purple, which when combined with the red make the colours of the flag of the Second Spanish Republic.

That provoked a strong reaction from some.

“I won't buy a shirt that does not represent my country,” one Twitter user wrote in response to the video presenting the shirt.

“Boycott the republican national team shirt. Spain is a monarchy, not a republic,” wrote another.

“I don’t plan on buying the republican flag,” added one more.

Officially, Adidas say the stripe is blue, not purple. The RFEF explained meanwhile that the shirt is inspired by a previous national team kit from the 1994 World Cup, which did indeed feature similar stripes down the side.

“The Spain home shirt pays homage to one of our most famous shirts, used at the USA World Cup in 1994. For the Russia World Cup, Adidas has paid tribute to this shirt, which sums up the red courage and fury. It presents a distinct and dynamic graphic consisting of red, yellow and blue diamonds, which represent speed, energy and the style of football associated with the Spanish national team,” the RFEF wrote on its website.

One person who does like the new shirt though is Podemos leader (and avowed republican) Pablo Iglesias. “It has been some time since the Spanish national team wore as nice a shirt as this one,” he noted while tweeting a picture of the kit.

Proclaimed in 1931, the Second Spanish Republic lasted until the outbreak of the Civil War in 1936, which culminated with it being overthrown by Franco’s Nationalists. In modern Spain, the “tricolor” flag of the republic is often associated with the political left.