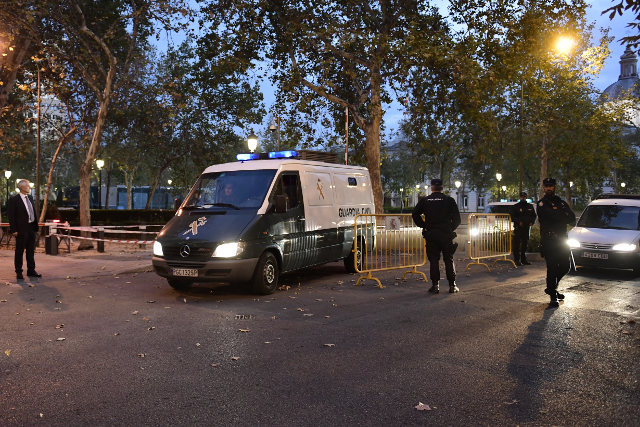 Carles Puigdemont, dismissed last week as Catalan president by the Spanish government and who has since holed up in Belgium, is likely to be hit with a European arrest warrant after failing to show at the court hearing in Madrid.

Judge Carmen Lamela, who on Thursday had Puigdemont's deputy and seven other deposed regional ministers detained pending a potential trial for alleged sedition, rebellion and misuse of public funds, will issue a warrant for Puigdemont “during the day Friday,” a judicial source in Madrid told AFP.

Puigdemont's Belgian lawyer Paul Bekaert had earlier told Flemish television channel VRT that his client told him that the warrant “has been issued against the president and four other ministers who are in Belgium.”

He said he expected that the Spanish judiciary would subsequently send an extradition request to Belgian federal prosecutors, adding that Puigdemont would appeal if a Belgian judge approved the request.

With television channels showing images of police vans with flashing blue lights said to be taking the former ministers to different prisons, Catalans took to the streets in anger and disbelief.

There were protests in front of the Catalan parliament in Barcelona, the regional capital, with police estimating a crowd of 20,000. Others gathered outside town halls across the region including 8,000 people in both Girona and Tarragona. Those in Barcelona held up their mobile phones like candles and waved separatist flags — red and yellow stripes with a white star — also holding black-and-yellow “libertad” (“freedom”) signs.

“It makes you angry even when you don't vote for independence because every time a disproportionate measure is taken, it only fuels independence,” said retired teacher Dolores, 66.

Puigdemont called in a statement broadcast on Catalan TV from an undisclosed location for the release of the ministers and said that the situation “is no longer an internal Spanish affair”.

“The international community, and especially the European community, must realise the danger these attitudes represent,” he said.

A total of 20 people including Puigdemont, Junqueras and the speaker of the Catalan regional parliament had been summoned for questioning on Thursday.

A hearing of the speaker of Catalan's parliament and five others at the Supreme Court was adjourned until November 9 after their lawyers requested more time to prepare their defence.

Puigdemont and four others with him in Belgium failed to show.

Puigdemont's Belgian lawyer Paul Bekaert told Flemish television channel VRT that his client told him that the warrant “has been issued against the president and four other ministers who are in Belgium.”

He expected the Spanish judiciary will now send an extradition request to Belgian federal prosecutors but said Puigdemont would appeal if a Belgian judge approves the request.

In respect to his no-show at the hearing, Bekaert said his client “did not find a climate conducive to testifying and it would be better to put a bit of distance between it.”

In her ruling, judge Lamela said she had ordered preventive detention for those who remained because of a possible flight risk.

Marta Rovira, a lawyer and Catalan separatist lawmaker, briefly broke down in tears as she spoke to reporters in Madrid after the announcement of the detentions.

“The Spanish state is a failed state, a state that has failed democratically,” she said. “I'm convinced we won't surrender, we won't, we will fight until the end.”

But Catalans, fiercely proud of their language and culture, remain deeply divided about independence, polls indicate.

The European Union has swung firmly behind Rajoy. Spain's central bank warned Thursday of a possible recession in Catalonia if the crisis continues.

In addition, there are signs of growing divisions in the separatist camp, with many unhappy with Puigdemont, particularly now he is hundreds of miles away from the region he hopes to lead to independence.