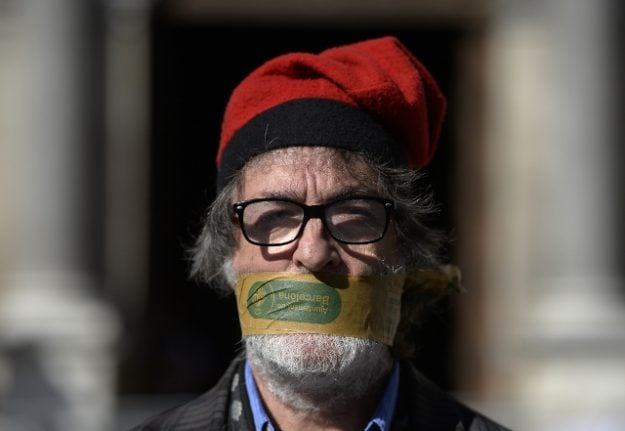 A supporter of Catalan independence protesting with his mouth tapes. Photo: Josep Lago/AFP

Indeed, they have probably lost what they had.

Spain's central government has taken control of the region for the first time since the end of dictatorship in the 1970s. Catalonia's separatist leader, facing likely prosecution, has fled to Belgium.

“I feel impotent,” says farmer Oscar Jansana, 43, who flies a Catalan independence flag — red and yellow stripes with a white star — outside his house in this small valley town north of Barcelona.

He and other separatists want the rich region to have control over its finances. They feel dismayed that in just a few days their independence effort has apparently all but collapsed.

“We have worked hard. We have collaborated as much as we could,” said Jansana. “And in the end we have ended up worse off than we were before.”

The northeastern region's parliament proclaimed an independent “Catalan Republic”, on Friday on the basis of an outlawed October 1st referendum.

Madrid promptly declared that regional president Carles Puigdemont and his government were dismissed.

Puigdemont and his followers still insist he is the rightful leader of the Catalans. But he is hundreds of miles away in Belgium. His lawyer says he will not return to Spain to face rebellion accusations unless he is assured of fair treatment by the courts.

Prime Minister Mariano Rajoy has put his own deputy, Soraya Saenz de Santamaria, in charge of the region, replacing Puigdemont.

“They have taken the republic to Belgium and we have been left with a viceroy,” said Susana Mora, a tobacco-seller in Dosrius.

'The people are angry'

Like thousands of Catalans, Mora acted as a human shield to try to block the way of national police from shutting down the local polling station during the referendum.

Despite the police resistance and a lack of electoral regulations, the separatists pushed ahead with the vote.

They said a majority of participants voted for independence. Last Friday, separatist lawmakers sang the regional anthem triumphantly after declaring a republic.

The euphoria has since faded.

“We don't understand what is happening. The people are angry,” said Mora, shutting up her shop.

“We thought that things would happen quickly, but no — this is going to go on for a very long time.”

Catalan demands for independence date back centuries but have surged in recent years.

Street rallies for independence have grown since 2010, when the Spanish courts repealed a key statute on the region's autonomy.

“We have been fighting for this for a long time. We have demonstrated, protested and voted many times,” said Cristina Carbo, walking her dog near Dosrius's gothic church.

“It seemed as though we had it within reach. But we were not strong enough when faced with a state that holds all the power.”

Separatists in 2015 launched a roadmap to form a functioning Catalan state.

But after two years and the past month of bitter tension with Madrid, Catalonia is back under central government control.

For Benet Salellas, spokesman for the far-left separatist party CUP, “the Catalan government was not prepared for a scenario where they would have to do this unilaterally.”

Some are clinging to hope of independence.

Local carpenter Josep Planas, 48, still has faith in Puigdemont and his team.

“They know what they are doing. It is going to be hard, but I am sure they have it all planned out,” he said.

“They told us we would vote on October 1st and we did. The same will happen now.”

But some locals are bitter about how the secession drive has been handled.

Separatist leaders had played down the risk of businesses abandoning the region and of Catalonia dropping out of the European Union. Both those threats reared their heads after the referendum.

“They deliberately lied to us,” says Ramon Sanchez, a 54-year-old lawyer and an opponent of independence.

“Politicians should tell the truth. They haven't done that here. They have forced the people to stand up for them and led us down a dead-end street.”

“The government of the (Catalan) republic does not have the capacity to take control,” said the leader, who asked not to be named.

“We have to examine where we went wrong and explain to people that this will not be easy,” he said.