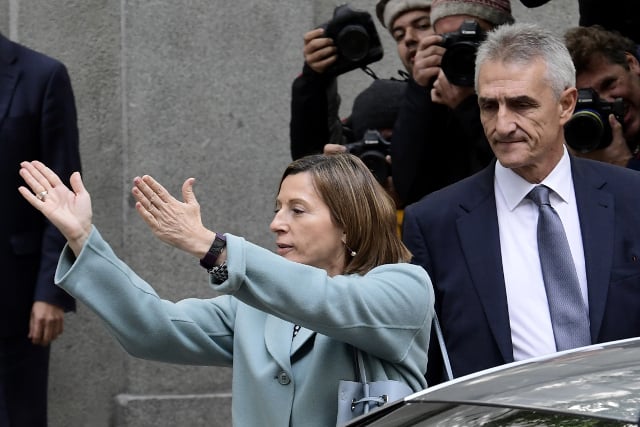 Accused by prosecutors of sedition and rebellion over the region's independence drive, which carry sentences of up to 15 and 30 years in jail respectively, the six had been summoned to court for questioning by a judge.

The hearings were adjourned by the court, which deals with cases involving lawmakers, in order to allow more time for the defence to prepare, taking into account the fact that they were only notified of the accusations two days ago.

The Supreme Court has ordered police surveillance of the six “in its least invasive form” until the 9th of November, according to their lawyer Xavier Melero, who explained they will need to be contactable by telephone until then.

Forcadell blew kisses to supporters as she left the building, while others went to speak to them before leaving in taxis.

Nearby in the Spanish capital's National Court, which hears major criminal cases, eight former Catalan government members were being questioned after also being summoned in the investigation into the secession drive.

Conspicuously absent though was the region's deposed leader Carles Puigdemont and four of his former ministers, who travelled to Belgium after the central government imposed direct rule on Catalonia on Friday as the regional parliament declared independence.

They decided to stay put in Belgium, slamming in a statement a “political trial dictated by the Spanish government.”