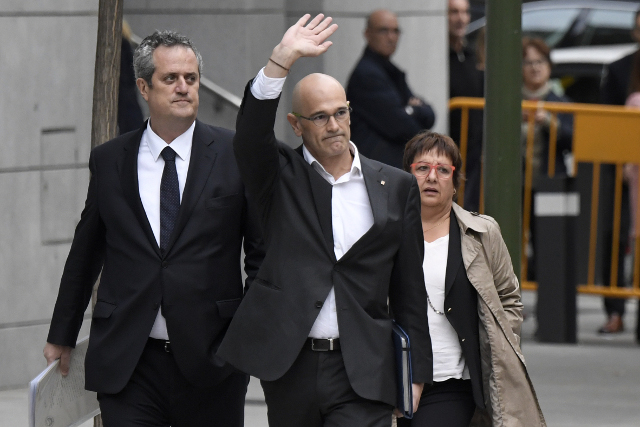 The demand came as they were grilled in Madrid over their role in Catalonia's rollercoaster secession push — although  Catalonia's axed leader Carles Puigdemont refused to turn up in court and remains holed up in Belgium.

Puigdemont and 19 others had been summoned by Spanish judges for separate hearings at the National Court and the Supreme Court on Thursday and Friday, accused of sedition, rebellion and misuse of public funds.

The hearing at the Supreme Court was quickly adjourned until November 9 following a request from lawyers to be given more time to prepare their defence, but proceedings at the National Court continued.

Prosecutors there made a request for eight former government members who showed up to be placed in preventive detention, the court said.

They asked for the ninth, Santi Vila, to be freed if he pays a bond of 50,000 euros. Vila resigned from his position as business minister in the Catalan executive a day before the declaration of independence.

Like Puigdemont, four other former ministers who had been summoned stayed away. They may face arrest warrants, international ones if necessary.