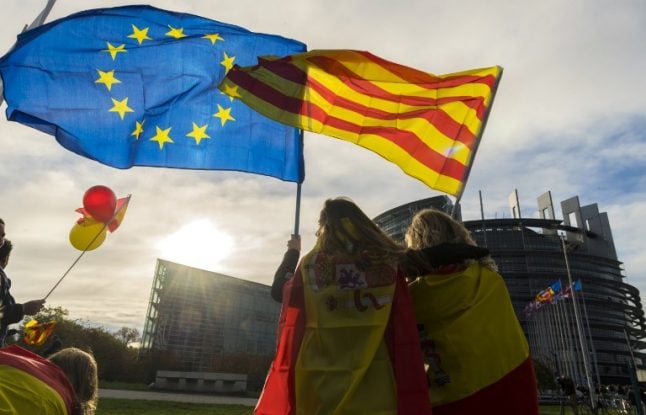 If Brexit was set to be the event that tested the cohesion and philosophy of the European Union, then the Catalan crisis has perhaps not read the script.

With deposed Catalan leader Carles Puigdemont in Brussels, pleading for the EU's support, what was previously distinctly an “internal matter for Spain” is slowly forcing itself on the EU.

Guy Verhofstadt, leader of the Alliance for Liberals and Democrats in Europe and a key member of the EU's Brexit negotiation team, at first condemned Spanish police's use of violence against pro-independence protesters earlier this month in Catalonia.

Yet 24 hours after Puigdemont's first press conference in Brussels, Verhofstadt today said Puigdemont had left Catalonia in “chaos and devastation” in a clear message to the former Catalan leader.

The Belgian government has also been clear, at least officially, that it isn't keen to hold any kind of formal talks with Puigdemont or his pro-independence affiliates.

Although Belgian Prime Minister Charles Michel was the first EU leader to talk out about the clashes on October 1st in Catalonia.

Violence can never be the answer! We condemn all forms of violence and reaffirm our call for political dialogue #CatalanReferendum #Spain

But the tables have turned since deposed Catalan leader Puigdemont, whose government staged a referendum on independence from Spain in Catalonia on October 1st – despite Spain's Constitutional Court declaring the referendum illegal – has moved to Brussels, without the intention of returning to Spain any time soon, according to reports in El Mundo.
READ ALSO: Puigdemont implies he accepts charges against him and new elections but wants dialogue with EU
On October 31st, Belgian PM Michel cooled his tone. “Mr Puigdemont has the same rights and responsibilities as any European citizen — no more, no less,” Michel said in a statement – according to AFP – stressing that his government had not invited the Catalan leader, who gave a press conference in Brussels on Tuesday October 31st.

Support for Puigdemont in Belgium appears to be low. Belgium's Deputy Prime Minister Kris Peeters had earlier quipped: “If you declare independence, it is best to stay close to your people.”

British PM Theresa May, German Chancellor Angela Merkel and French President Emmanuel Macron have all distanced themselves from the crisis, stressing it is a Spanish matter and endorsing a policy of silence.

The theory goes that EU leaders fear the copycat effect the Catalan secessionist movement could have on other regions.

Just under two weeks ago, two Italian regions held a referendum on whether they should have more autonomy from Rome. While non-binding, a majority in both regions voted 'yes' to getting more powers from Rome.

But separatist movements have also been gaining momentum for some time in Italy's South Tyrol region, in Flanders (Belgium) and in Brittany in France.

Dialogue, please! (But not with us)

The European Commission issued a statement on October 2nd, the day after the referendum. “We call on all relevant players to now move very swiftly from confrontation to dialogue,” the Commission said in a statement, although members have largely been silent since.

The European Council's Commission for Human Rights did however write to the Spanish government on October 4th to condemn the Spanish police's use of violence during the referendum period days earlier.

Spain has since activated Article 155 of its constitution to reclaim control of Catalan institutions, following a declaration of independence on October 27th by Puigdemont's former government.

“I am writing to you to share my concerns regarding allegations of disproportionate use of force by law enforcement authorities in Catalonia on October 1st 2017,” Nils Muižnieks, the European Council's Commissioner for Human Rights, wrote in a letter to the Madrid government.

“I am closely following the developments in Catalonia and have received reports about disproportionate use of force against peaceful demonstrators and persons engaged in passive resistance to police action, on the streets and in and around places where such persons intended to vote. It has also been reported that persons were, in certain cases, subjected to disproportionate and/or unnecessary use of force by the police within such places, while being prevented from leaving the premises,” wrote Muižnieks.

“I fully acknowledge the difficulty for police officers to do their work in the tense context that currently prevails in Catalonia. However, I stress that it is of the utmost importance to ensure that law enforcement officials receive clear instructions on the need to exercise restraint and on the proportionate use of force,” adds the letter.

While few EU officials have gone on record to criticize Spain's approach to the Catalan referendum, stressing Spain's sovereign right to sort out its internal issues, some officials behind the scenes remain frustrated.

“Spain is a democratic country; they respect the judiciary,” one EU source told the Guardian. The same source allegedly described the situation as “awful” because Rajoy has made so many mistakes.

Separatist figures on the right of the political spectrum have tried to seize on the EU's silence to undermine its ability as an organization: Nigel Farage said the furore would be much greater if “British police had roughed up a couple of Scottish nationalist protesters,” during a speech at the European Parliament.

Belgium Green MP Phillipe Lamberts has gone as far as to say that the EU's silence could have serious long term repercussions, comparing what is happening in Catalonia to the history of Northern Ireland.