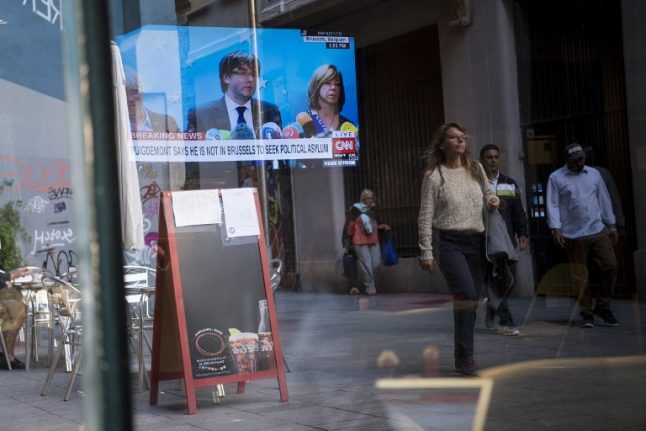 Out of touch? People walk past a bar in Barcelona showing a live broadcast of Carles Puigdemont's news conference in Brussels on October 31st. Photo: Josep Lago/AFP.

The National Audience in Madrid, which deals with major criminal cases, summoned Carles Puigdemont and 13 other former members of his administration, dismissed by Spain's central government last week, to appear Thursday and Friday. They are then set to be placed under formal investigation.

On Monday October 30th, Spain's chief prosecutor said he was seeking charges of rebellion — punishable by up to 30 years behind bars — sedition and misuse of public funds.

But the 54-year-old Puigdemont is in Brussels, where he surfaced after reportedly driving to Marseille in France and taking a plane to the Belgian capital.

At a packed and chaotic news conference Tuesday, Puigdemont said he was in Brussels “for safety purposes and freedom” and to “explain the Catalan problem in the institutional heart of Europe.”

He denied that he intended to claim asylum but said he and several other former ministers who travelled with him would return only if they have guarantees that legal proceedings would be impartial.

Belgian Prime Minister Charles Michel said that during Puigdemont's time in the country he would be “treated like any other European citizen” with “the same rights and responsibilities”.

READ ALSO: Puigdemont implies he accepts charges against him and new elections but wants dialogue with EU

Two former ministers flew back to Barcelona late on Tuesday where they were greeted by a small group of demonstrators who waved Spanish flags in their faces and shouted “traitors!” and “Viva Espana!” at them.

If Puigdemont fails to appear in court as requested, Spanish prosecutors could order his arrest. His lawyer Jaume Alonso-Cuevillas complained in a Tweet that Puigdemont had not been “given time to prepare the defence.”

Puigdemont's Belgian lawyer Paul Bekaert, who in the past represented members of the former militant group ETA, said Puigdemont would not appear before the court on Thursday. “We have decided not to apply for asylum, but to fight any extradition request in the courts,” said Bekaert, according to Spanish daily El Mundo.

The National Audience also gave Puigdemont and his former ministers three days to pay a combined deposit against potential penalties of €6.2 million ($7.2 million).

Uncharted territory
Puigdemont's departure and the court's announcement are the latest twists in the saga over semi-autonomous Catalonia's drive for independence, which has sparked Spain's biggest crisis in decades.
With its own language and distinct culture, Catalonia, which accounts for a fifth of Spain's economy and 16 percent of its population, is deeply divided over independence.
On October 1st, the region held an unregulated referendum — marked by a heavy-handed operation by Spanish police — in which a large majority voted in favour of seceding from Spain.
But Spain's top court had ruled the plebiscite illegal, and turnout was just 43 percent. Puigdemont insists nonetheless the referendum gave the Catalan parliament a mandate to declare independence last Friday, October 27th, a decision relayed on large screens to cheering crowds in the regional capital Barcelona.
READ ALSO: AS IT HAPPENED: Catalonia's second working day of Spanish direct rule
But the reaction from Spanish Prime Minister Mariano Rajoy's government was swift and emphatic. Invoking a never-used article of the constitution, Madrid dismissed Catalonia's leaders and imposed direct rule.
On Tuesday Spain's top court ordered the suspension of the Catalan parliament's independence declaration. Spain's Civil Guard police force meanwhile searched the headquarters of Catalonia's regional police in a probe centred on the independence referendum, a spokesman said.
Spain's Supreme Court also summoned the former speaker of the Catalan parliament to be put under formal investigation.
'Slow down'
There had been speculation that Catalan leaders and civil servants might seek to disrupt Madrid's imposition of direct rule but it passed off without major incident.
“We haven't come across a single civil servant who isn't doing his or her duty,” Enric Millo, a central government representative in Catalonia, said Tuesday.
But it appears that the crisis has converted more Catalans into independence supporters. A regional government opinion poll carried out in October suggested more Catalans now favour independence than not.
The survey found that 48.7 percent said they wanted a separate state against 43.6 percent who did not. The last such poll, conducted in July, found close to 50 percent against secession versus 41.1 percent in favour.
Still, a former Catalan minister, Santi Vila, told Catalan radio Rac1 on Tuesday October 31st that Puigdemont's government had been “under the illusion” that breaking away would be easy.
Rajoy has called snap elections for December 21 to replace the Catalan parliament in a drastic bid to stop the secessionist drive. Puigdemont said that he accepted the “challenge” and that he would “respect” the result — while calling on Madrid to do the same if separatists retain their majority.
READ MORE: AS IT HAPPENED: Catalonia's second working day of Spanish direct rule