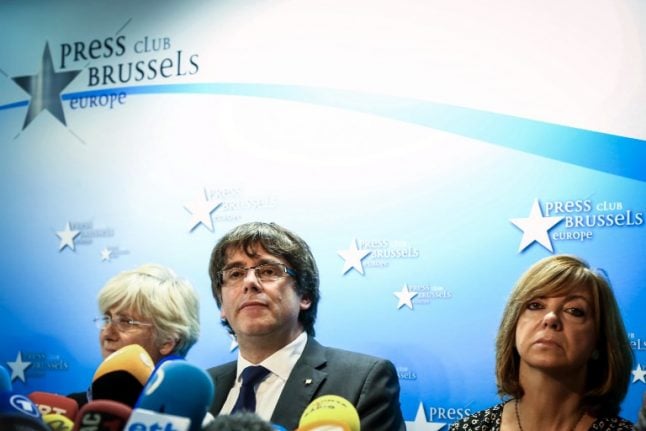 Catalonia's dismissed leader Carles Puigdemont (C), along with other members of his dismissed government addresses a press conference in Brussels on October 31, 2017. Photo: Aurore Belot/AFP.

The former Catalan leader, who has been stripped of his authority by Spain's activation of Article 155 and direct central government rule, was addressing the media from the Brussels Press Club.

Puigdemont spoke for 10 minutes or so, addressing the issue of the 'Catalan Republic', which he and his allies declared independent last week shortly before Spain dissolved the regional parliament's powers.

The controversial ex-Catalan president, who faces charges of sedition in Spain's Supreme Court, said he would not be “negligent to his responsibilities before the Spanish justice system,” seeming to acquiesce to the charges brought against him by Spain's public prosecutor.

The deposed Catalan politician also gave the clearest indication yet that he would not seek to resist Spain's imposition of direct rule in the interests of avoiding further violence and “to prevent the dismantling of Catalan institutions.”

But he also said, while he would not seek asylum in Belgium, he would only return to Catalonia “with the necessary guarantees” in place.

“I am not here to claim political asylum. I am in Brussels as the capital of Europe. I am here in order to act with freedom and safety,” said Puigdemont. He alleged that “the Spanish government has mounted an aggressive campaign against Catalan officials and the Catalan people.”

Puigdemont said he and his movement would pursue the goal of an independent Catalan republic, albeit peacefully and “rejecting violence.”

Spain's Constitutional Court had declared the referendum illegal and unconstitutional but Puigdemont and his allies nevertheless went ahead and held it, in which a majority from a minority of Catalans voted in favour of independence.

Catalonia remains largely divided on the issue of independence but more than one million Catalans marched for unity with Spain two days ago on October 29th.

Puigdemont said he had gone to Brussels to avoid “further violence”, but also because “it is the heart of Europe.” He outlined a four-point plan.

1) “We have come to Brussels as the government of the Catalan Republic to outline the Catalan problem at the heart of Europe,” said Puigdemont, in French. He made use of Spanish, Catalan, French and English during different parts of the conference.

2) “Neither pro-independence party has abandoned its work,” added Puigdemont, despite the limitations “imposed” by direct Spanish rule. “We will not be negligent to our responsibilities before Spanish justice,” he added, giving the first indication so far that he accepts the Spanish Supreme Court's charges against him.

3) “We will respect the result of the December 21st elections, regardless of the result,” said Puigdemont.

Spanish Prime Minister Mariano Rajoy called for new regional election in Catalonia on December 21st, the first time a Spanish prime minister has ever called a regional election in the region. Normally the Catalan president would call an election. Puigdemont challenged the Spanish government to accept the result.

4) Finally, Puigdemont called for an intervention from the EU.

Contrary to previous reports, Puigdemont said he was not in Belgium to talk with Flemish nationalists and will “not interfere in Belgian politics and will remain neutral.” He says he does not know how long he will remain in Brussels, “it depends on the circumstances.”

Belgian Prime Minister Charles Michel said Tuesday that deposed Catalan separatist leader Carles Puigdemont “will be treated like any other European citizen” after he said he planned to stay in Brussels.

“Mr Puigdemont has the same rights and responsibilities as any European citizen — no more, no less,” Michel said in a statement – according to AFP – stressing that his government had not invited the Catalan leader, who gave a press conference in Brussels on Tuesday October 31st.