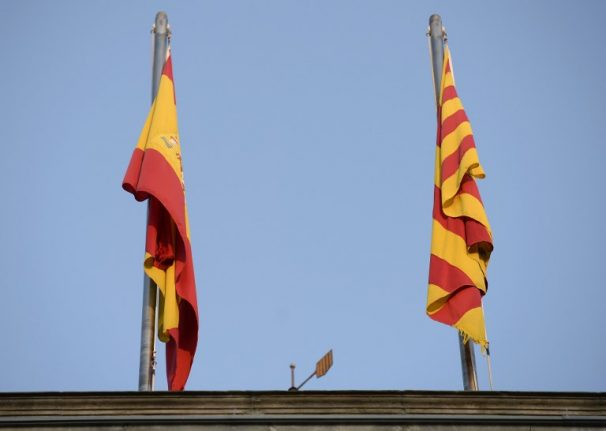 Both were taken offline as part of Article 155 measures, writes Spanish news site 20 Minutos. Both sites were offline again and unavailable when tried by The Local's staff at 4:50pm on Tuesday October 31st.

3:57pm: According to a new poll by the Catalan parliament's centre for research (CEO), 48.7 percent of respondents answered yes to the question: 'Would you like Catalonia to be an independent republic?' 43.6 percent said they would rather remain with Spain than secede; 6.5 percent were “unsure” and 1.3 percent did not answer, reports El Mundo.

3:29pm: Belgian Prime Minister Charles Michel has said that deposed Catalan separatist leader Carles Puigdemont “will be treated like any other European citizen” after he said he planned to stay in Brussels.

“Mr Puigdemont has the same rights and responsibilities as any European citizen — no more, no less,” Michel said in a statement, stressing that his government had not invited the Catalan leader, who gave a press conference in Brussels on Tuesday October 31st, reports AFP.

2:40pm: Spain's Supreme Court said it had summoned Catalonia's former parliamentary speaker to appear for questioning this week to be charged over the region's independence drive, reports AFP. Carme Forcadell and her parliamentary deputies have been summoned to appear in court on November 2 and 3, Spain's top court said in a statement.

2:34pm: Spain's Constitutional Court has ordered the suspension of last week's declaration of independence by the Catalan parliament, a court source said. “The court plenary has just provisionally suspended the independence declaration” while it examines an appeal by the Spanish government, the source said, indicating the latest in a series of measures by Madrid to stifle the region's independence drive, reports AFP.

1:26pm: Puigdemont's conference is over.

1:23pm: Puigdemont says he will “not interfere in Belgian politics and will remain neutral” on the subject of Flemish nationalism. He says he does not know how long he will remain in Brussels, “it depends on the circumstances.”

01:17pm: “Brussels is the capital of Europe and our issue, I insist, is a European issue,” says Puigemont, answering a question about why he travelled to Brussels. Puigdemont says his security cohort was reduced and he was not provided with adequate safety vis-a-vis far right threats.

01:14pm: “I am not here to claim political asylum. I am in Brussels as the capital of Europe. I am here in order to act with freedom and safety.”

“We are here looking for guarantees,” says Puigdemont, in response to a question about what conditions he would need to return to Catalonia. “The public prosecutor's office document of charges against us is entitled 'harder will be the fall',” notes Puigdemont.

1) “We have come to Brussels as the government of the Catalan Republic to outline the Catalan problem at the heart of Europe,” says Puigdemont, switching back to French.

2) Neither pro-independence party has abandoned its work, says Puigdemont, despite the limitations “imposed” by direct Spanish rule. “We will not be negligent to our responsibilities before Spanish justice,” says Puigdemont, implying he accepts the Spanish Supreme Court's charges against him.

4) “To the international community and Europe, I ask you to react. I ask you to react. Our cause is built on the same values on which Europe is founded; liberty, freedom, non-violence and peace,” says Puigdemont, calling on the EU to intervene. He says Europe could collapse in the future if it doesn't react to such issues.

1:01pm: “The state of Catalonia will be different,” to how Spain has behaved, adds Puigdemont, clearly not renouncing on his goal of independence, despite the Supreme Court of Spain's charges.

1pm: “We cannot build a Republic for anyone starting from violence,” said Puigdemont, now speaking Spanish, the third language he has used in five minutes.

12:59pm: Puigdemont says he and his party have prioritized a plan to avoid further violence, because his movement has always “prioritized dialogue.”

12:58am: Switching back to French, Puigdemont has condemned what he called the Spanish government's violence against “thousands of people,” many of the elderly.

12:57: Puigdemont has said that the Spanish government has mounted an “aggressive campaign against Catalan officials and the Catalan people.”

12:55pm: Puigdemont's Brussels press conference has begun with the former Catalan leader talking in French. He says he will also talk in Catalan, because there are “things that my people back home need to hear.” He has now switched to Catalan.

12:42pm: Podemos regional leader in Catalonia, Dante Fachin, has defied the dissolution of his branch by Podemos national leader Pablo Iglesias. Fachin says he will try and negotiate a common platform with Catalonia's pro-independence parties to look for a common stance in the December 21st regional elections called by Spanish PM Rajoy, reports El Mundo.

“Iglesias is interfering in Podemos in the same way that Rajoy is in Catalonia,” said Fachin, according to the report, signalling a new potential split in the party.

12:23pm: Sources close to Spanish daily El Confidencial claim Puigdemont travelled to Brussels without consulting his own party or Oriol Junqueras – a close ally – leader of the other pro-independence Catalan party the ERC.

12:21pm: Regardless of his divisive status in Catalonia, journalists in Brussels want to hear what Carles Puigdemont has to say.

12:01pm: Spain's Supreme Court has accepted the public prosecutor's charges against Catalan officials, including the president of the Catalan parliament, Carme Forcadell, and Catalan leader 'in exile' (in Brussels) Carles Puigdemont, report Spanish dailies. It has also confirmed its willingness to try the accused in its court rooms.

11:57am: Spain's public prosector, José Manuel Maza, has also said that the Mossos d'Esquadra were part of the Puigdemont's former Catalan government's deliberate drive towards independence. Full details of the statement by the 'Fiscalia' here.

11:32am: Spain's public prosecutor has levelled charges of sedition, rebellion and embezzlement against Puigdemont and several other key pro-independence Catalan politicians and officials.

“The mobilizations and tumultuous concentrations developed in opposition to the orders of judicial authorities, the massive calls to prevent agents of authority from carrying out their duties, the acts of harassment in the form of unlawful 'escraches' (ED: public demonstrations intended to shame authorities) towards members of the National Police and of the Guardia Civil in their places of work and rest, exemplify how the defendants did not seek simply to have the support of citizens to carry out their pro-independence project within the constitutional legality, which would not be the object of reproach, but of direct or indirect appeals, through sovereign entities, to popular or citizen mobilization as an intimidating and violent means to achieve the secessionist goal,” writes Spain's Public Prosecutor's Office in a statement explaining the charges called for against Catalan officials.

11:15am: Units of Spain's Guardia Civil are allegedly on standby docked off the coast of Barcelona on a ship, according to a BBC World Service report.

11:10am: Is Carles Puigdemont in Belgium to discuss asylum, his cause with Flemish nationalists, or for secret negotiations with Rajoy brokered by the EU?

READ MORE: Are the Spanish government and the former Catalan authority in secret negotiations?

11:05am: Spanish prime Minister Mariano Rajoy has called an emergency meeting of his cabinet for 6pm today to approve “organizational aspects” of the December 21st elections, reports El Pais.

The daily, citing government sources, says the police actions are part of an investigation by Spain's National Court – one of the country's highest –  into the Mossos d'Esquadra's alleged failure to apply Spanish law during the referendum period, as well as the accusations of sedition levelled against the Mossos d'Esquadra's former head, Josep Lluís Trapero.

Trapero has been removed from his role and replaced by his deputy.

Catch up on all of yesterday's developments in Catalonia. READ MORE: AS-IT-HAPPENED: Catalan administration overhauled amidst major changes