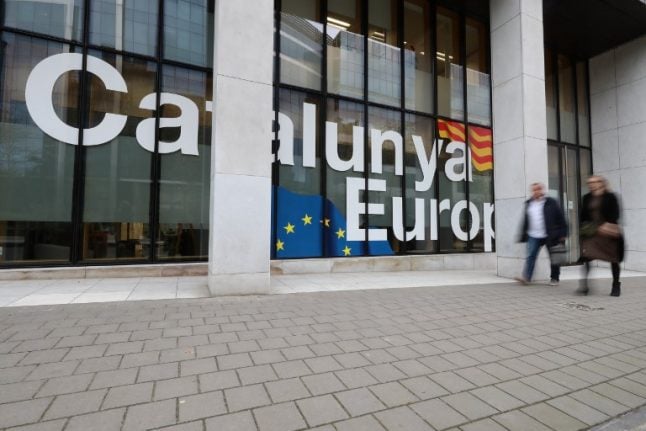 But Paul Bekaert, who specializes in asylum issues, said “Puigdemont is not in Belgium to request asylum”, only to prepare a legal riposte to any eventual moves by Madrid.

“On this matter (asylum) nothing has yet been decided,” he told Flemish television VRT. “I spoke with him personally in Belgium… and he officially made me his lawyer.

“I have more than 30 years of experience with the extradition and political asylum for Spanish Basques, and it's probably because of this experience that he came to me.”

Spanish media outlets reported that Puigdemont was travelling with several members of his axed government.

Bekaert was one of the lawyers for Luis Maria Zengotitabengoa, a suspected member of the armed Basque separatist group ETA, whose extradition from Belgium to Spain was authorised in 2010.

Spain's chief prosecutor Jose Manuel Maza said he was seeking charges including rebellion — punishable by up to 30 years in prison — and sedition against the Catalan leaders who were sacked by Madrid on Friday October 27th.

Maza said they had “caused an institutional crisis that led to the unilateral declaration of independence carried out on October 27 with total contempt for our constitution.” A court now has to decide whether to bring charges.

But several experts said it seemed unlikely that Puigdemont would be able to secure the status of political refugee in Belgium. “It's quite exceptional to obtain asylum for a citizen of a European Union country,” Dirk Van Den Bulck of Belgium's CGRA refugee agency told RTBF television.

He would have to prove a “threat of persecution” in his country of origin and an impossibility of being protected there, Van Den Bulck said, which would be a direct contradiction of “the respect of fundamental rights” required of all EU members.

But Belgian Prime Minister Charles Michel later poured cold water on the idea, and an N-VA spokesperson told AFP the party had not invited Puigdemont to Brussels.

Puigdemont maintains that the result of the banned independence referendum on October 1st gave the region's parliament a mandate to declare on October 27th that it was breaking away from Spain.

Following this declaration, Madrid sacked Catalan's leaders and took control of the semi-autonomous region under a previously unused “nuclear option” in the constitution.

Spanish Prime Minister Mariano Rajoy called snap elections for December 21 to replace the Catalan parliament in a bid to stop the secessionist drive.

The European Union has largely spurned the independence declaration, and several EU institutions told AFP that no meetings are planned with Puigdemont in Brussels.

A spokesman for Puigdemont's entourage said the former Catalan president will give a press conference at 12.30pm CET to explain “his work” in Brussels, reports Spanish daily El Mundo.

“I don't want to prejudice anything,” Belgium's deputy prime minister, Kris Peeters, told Belgian daily echo.be. “But when one is calling for independence, it is better to remain close to one's people.”

Lawyer Paul Bekaert said Puigdemont has “no intention of hiding in Belgium.”