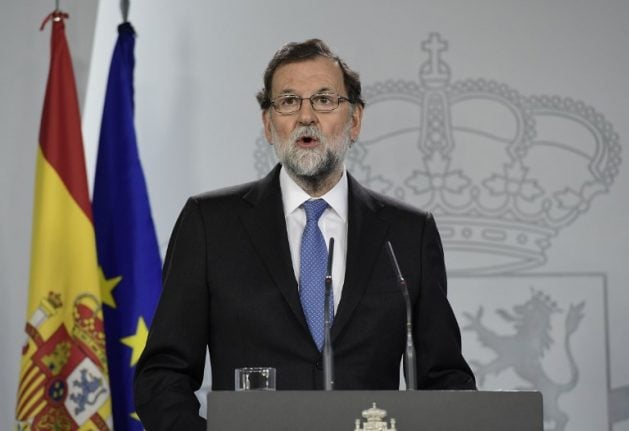 “We cannot recognize the coup d'etat against Catalonia, nor any of the anti-democratic decisions” by the central Spanish government, Catalonia's deputy leader Oriol Junqueras, wrote in a Catalan newspaper this weekend.

It is unclear if Catalonia's now ex-leader Carles Puigdemont and the rest of his sacked executive will try to go to work in Barcelona on Monday October 30th. “We will see,” a spokesman for the deposed regional government told AFP.

“If they decide themselves that they are the government of the republic (of Catalonia) then we will come out and support them,” a source within the separatist camp told AFP.

If they do try, Catalan police could be ordered by Madrid to stop them. Top police chiefs in Catalonia have already been replaced by Madrid. The outgoing head has urged officers to be loyal to their new superiors.

Local government offices have been ordered to remove photos of Puigdemont, a police spokesman said. Some 200,000 Catalan civil servants are now meant to take direct orders from Madrid.

Spain's Foreign Minister Alfonso Dastis said it was “hard to see” how Puigdemont and the others, who prosecutors may charge with a string of offences this week, “will go on governing”.

“Reality is already sinking in, will continue sinking in and they will realize that they cannot do something without the authority of law,” he told Britain's Sky News on Sunday.

On top of firing Catalonia's government — an unprecedented step since Spain's return to democracy four decades ago — Spain's Prime Minister Mariano Rajoy dissolved its parliament and called December 21 elections for the region.

With its own language and distinct culture, Catalonia accounts for about 16 percent of Spain's population and a fifth of the country's economy. The current crisis was sparked by a referendum on October 1 that saw Catalans vote massively in favour of the region, which already enjoys considerable autonomy, breaking away.

Turnout was only 43 percent — separatists say a heavy-handed Spanish police operation prevented it from being higher — and Rajoy's government declared it illegal.

After Friday's declaration of independence, Catalan lawmakers hugged and sang the Catalan anthem. The session was beamed onto giant screens outside and a crowd of 15,000 cheered every “yes” vote.

But on Sunday it was the turn of supporters of a united Spain, with hundreds of thousands taking to the streets not of Madrid but of the Catalan capital Barcelona, waving national and European flags and chanting “Viva Espana”. Protesters wave Spanish flags during a pro-unity demonstration in Barcelona on October 29, 2017. As many as one million Spaniards rallied in Catalonia's capital Barcelona, waving national and European flags and chanting “Viva Espana!” to denounce regional lawmakers' vote to sever the region from Spain. Photo: Lluis Gene/AFP.

Municipal police said the crowd numbered about 300,000 while organisers said 1.3 million turned out and the central government's representative in Catalonia put the figure at one million.

“We are all Catalonia,” proclaimed a massive banner, as the crowd included parents with young children, retired couples and large groups of young people. Many chanted “Prison for Puigdemont”.

“It was an act of madness that has brought us to the brink,” said Alex Ramos, the vice-president of Societat Civil Catalana, a group opposed to independence that organized the rally. “The streets don't belong just to the separatists,” he added.

Yet the central government in Madrid is reluctant to show its footprints, or even its officials, in Catalonia. The government in Madrid has contacted key Catalan public institutions and asked them to carry on their duties as normal until new elections are held on December 21st, a government source apparently told Spanish daily El Pais.

Despite Spain activating Article 155 of the constitution to dissolve the Catalan regional government's autonomy and authority, Rajoy's government does not intend to place central government functionaries in Catalan departments, says El Pais' source, except in extreme circumstances and only with “maximum discretion.”