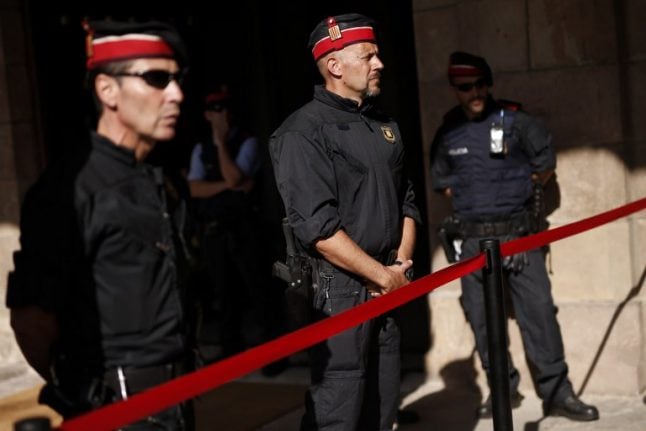 4:10pm: The Spanish economy grew in the last quarter, according to the latest figures from Spain's national office of statistics INE, despite the Catalan crisis.

3:18pm: Carme Forcadell will continue in her role as president of the Catalan National Assembly, albeit of a parliament that has been dissolved and thus with limited powers, until new elections are held on December 21st, reports El Mundo.

3:06pm: Podem leader Pablo Iglesias has dissolved the authority of his party in Catalunya and has announced a vote among members to see if his party will contest elections in Catalonia on December 21st.

The head of Catalonia's Podem branch leader Alfonso-Dante Fachin had yesterday declared that Spain's imposition of Article 155 and the elections called by Rajoy for Catalonia on December 21st, 2017, “were not normal.”

2:47pm: Puigdemont's pro-independence party PDeCAT confirms it will contest the December 21 elections in Catalonia “in defence of institutions and against the wretched 155.” The party had originally said contesting the elections could undermine last week's declaration of independence.

2:20pm: Deposed former Catalan president, Carles Puigdemont, is apparently already in Belgium, according to sources cited by El Periodico. El Confidencial reports that Puigdemont has travelled to Brussels with the intention of meeting with Flemish nationalists, who are said to be sympathetic to his cause.

12:47pm: El Mundo reports that Spain's public prosecutor's office has ordered that only the pro-independence MPs who voted in last week's declaration of independence will have to appear before Spain's Supreme Court to face charges of 'rebellion'. Other pro-independence Catalan officials will face the same charges but in the National Court, one of Spain's highest judicial authorities, reports El Mundo.

12:10pm: Carme Forcadell, former president of the Catalan regional parliament, has confirmed that the organ “has been dissolved,” in accordance with Spain's activation of Article 155, according to sources not named by El Pais.

The daily also reports that Puigdemont posted a photo of himself where he appears to be inside the Palau de La Generalitat, the Catalan parliament headquarters.

11:16am: Life goes on in Catalonia, despite the political uncertainty. A bride and groom walk in front of the 'Generalitat' palace (Catalan government headquarters) in Barcelona on October 30, 2017. Spain enters uncharted and potentially perilous territory today as Madrid moves to take over the running of Catalonia in response to the rebellious region's parliament unilaterally declaring independence. Lluis Gene/AFP.

11:11am: Spanish daily El Confidencial reports that Catalonia's pro-independence parties are divided on whether to contest the December 21 regional elections called by Spanish Prime Minister Rajoy as part of the Article 155 overhaul of Catalonia.

The Catalan European Democratic Party (PDeCAT) is reportedly going to, according to El Confidencial's sources. Puigdemont's party however remains divided: The key dilemma it faces is how to contest a regional election in a territory where it has already declared independence. Oriol Junqueras, president of the party, is apparently “tempted,” according to El Confidencial.

But party secretary Marta Rovira, along with many of the party's MPs and officials, believe contesting the elections could automatically undermine the independence declaration and their goal of an independent republic, claims the daily.

10:50am: Former Catalan government official Josep Rull confirmed on twitter that he has left his office, although he added that he will “continue with with the planned agenda.” He had earlier tweeted a picture of himself at work at his desk, in defiance of Article 155.

Prime Minister Mariano Rajoy told Catalan officials who have been removed from their job that they would be arrested and charged if they returned to their posts with the intention of working, reports El Mundo.

10:12am: Some Catalan officials however ignored the central government directions and returned to work as if nothing had happened. Former Catalan Minister for Territory and Sustainability Josep Rull i Andreu tweeted a photo of himself at his desk, writing that he is “exercising his responsibilities as assigned by the Catalan people.”

The daily reports that regional police have gone to Rull's office to physically remove him from his post, adds El Mundo. El Pais reports that Rull went to his office to tweet the photo and left of his accord shortly after, accompanied by police.

Josep Lluís Trapero Álvarez, former head of Catalonia's regional police, the Mossos d'Esquadra, has been replaced by his deputy Ferran Lopez, according to Spanish dailies.

Meanwhile, former Catalan president, Carles Puigdemont, is said to be inside Catalonia's Parliament as the world's media await outside.

A small group of people has gathered calling for peace outside Radio Catalunya, that was attacked by a far-right group on the weekend, tweeted one of the radio's producers.