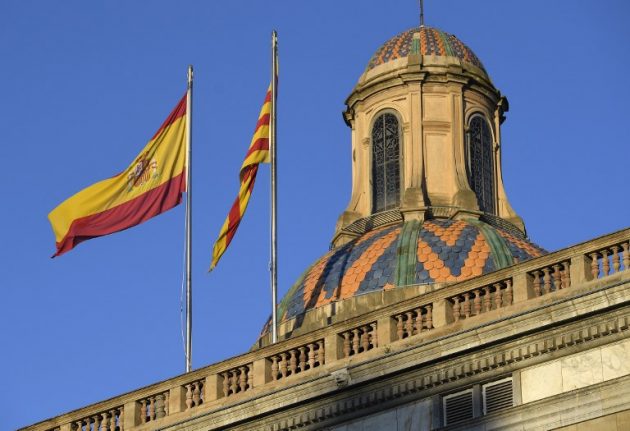 As Catalonia's independence crisis deepens, here are the key events that have rocked the region since the referendum on splitting from Spain.

Hundreds of thousands of Catalans vote in an independence referendum held despite a court ban deeming it unconstitutional. Spanish riot police try to block the vote. Shocking footage emerges of them using batons and rubber bullets on crowds and roughing up voters.

The Catalan government says 90 percent of those who voted backed independence, but turnout was only 43 percent as many who oppose a split boycotted the poll. People clash with Spanish police officers outside the Ramon Llull polling station in Barcelona October 1st, 2017 during a referendum on independence for Catalonia banned by Madrid. Photo: Fabio Bucciarelli/AFP.

A strike disrupts Barcelona's port, transport and some businesses. Up to 700,000 people demonstrate in the city against police violence. Protesters gathered in front the Spanish National Police headquarters during a general strike in Catalonia called by Catalan unions in Barcelona, on October 3, 2017. Large numbers of Catalans observed a general strike to condemn police violence at a banned October 1st referendum on independence, as Madrid comes under growing international pressure to resolve its worst political crisis in decades. Photo: Josep Lago/AFP.

Banco Sabadell, Catalonia's second largest bank, announces it will shift its registered domicile out of the region. About 1,700 companies follow suit.

Tens of thousands of people demonstrate across Spain on October 7, some demanding unity, others dialogue. The next day hundreds of thousands march in Barcelona to back unity.

In a move sparking confusion, Catalan leader Carles Puigdemont and his separatist allies sign a declaration of independence, but say they are suspending its implementation to allow for time for negotiations with Madrid. The next day, Prime Minister Mariano Rajoy gives Puigdemont until October 16 to clarify his stance.

Puigdemont refuses to clarify whether he had declared independence and instead calls for dialogue. Madrid gives him an extended deadline of October 19 to say whether he is planning to secede.

A court orders the leaders of two powerful grassroots independence groups, Jordi Cuixart and Jordi Sanchez, to be detained pending an investigation into sedition charges. Puigdemont accuses Rajoy of “the worst attack on institutions and Catalan people” since Spain's dictatorship and turns down an invitation to address the Senate to state his case for independence. Puigdemont says he considered calling elections to stave off the central government's takeover bid, but received “no guarantees” to make this possible.

Catalan lawmakers approve a motion by 70 votes to 10 to declare an independent republic, a narrow majority in the 135-member assembly, as many opposition members walk out. Independence supporters stage mass street celebrations. The Senate grants Madrid powers to impose direct rule on Catalonia. Catalan president Carles Puigdemont casts his vote for a motion on declaring independence from Spain, during a session of the Catalan parliament in Barcelona on October 27th, 2017. Catalonia's parliament voted to declare independence from Spain and proclaim a republic, just as Madrid is poised to impose direct rule on the region to stop it in its tracks. A motion declaring independence was approved with 70 votes in favour, 10 against and two abstentions, with Catalan opposition MPs walking out of the 135-seat chamber before the vote in protest at a declaration unlikely to be given official recognition. Photo: Lluis Gene/AFP.

Rajoy announces he has dissolved the Catalan parliament and formally removed Puigdemont and his executive from office. He calls regional elections for December 21st. Facing Spanish prosecutors charges for rebellion, Puigdemont is said to be in Brussels. Meanwhile his party says it will stand in the December 21 regional election called by the central government. A picture taken on October 30, 2017 shows the headquarters of the Delegation of the Government of Catalonia to the European Union, in Brussels. Catalonia's dismissed separatist leader was in Brussels today, a Spanish government source said, as prosecutors called for him to be charged with rebellion over his drive for Catalan independence. On October 29th Belgium's immigration minister suggested he could receive asylum in Belgium on the grounds that he might not get a fair trial in Spain. Photo: Benoit Doppagne/Belga/AFP.